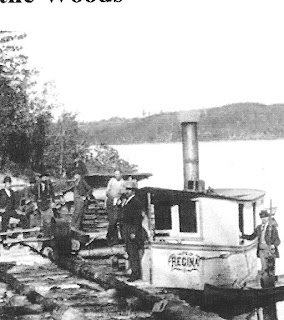 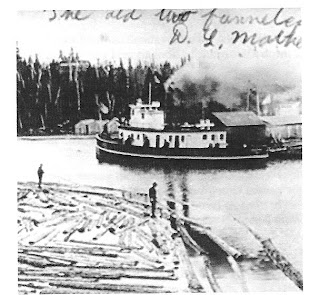 Two Brydges brothers made a living in the steamboat industry in the Lake of theWoods area in northern Ontario in the late 1890's.  Edward W Brydges and his brother Clarence M Brydges ran a service between Rat Portage (Kenora, Ontario) and Ft Francis.  My father had told my mother that he had a cousin who was a "captain of a steamboat" but my mother was always skeptical about this.  Indeed it was true.  Captain Ed Brydges apparently made such an impression on my dad that he wanted to name me Edward should I have been a boy.  It's funny how little bits of knowledge that I had of my father have finally connected in an unexpected way for me.
In the following article there are different types of boats mentioned that belonged to the brothers.  Edward's boat was a luxury liner in those days called the Edna Brydges named after a daughter.  He also had a ferry named Kinina after his wife.  His brother Clarence piloted the ferry Annie Mac.  The history of what they carried and charged is an interesting bit of history.  I've also found references in the Manitoba Morning Free Press which is cited on their pages in Ancestry.com.
Some History of Canadian Steamboats in the1890's
WATERFRONT FLOTSAM – Kenora Miner and News – 1905

The Catherine S showed up Monday last at noon time with a three-pocket tow from Dawson Narrows.

Tomorrow at noon, the Keewatin will go on ferry duty while the Argyle with the Brandon takes the conference delegates for a ride on the lake.

The Clipper returned Sunday from her trip to Big Island with oxen for the Indians. On Monday she took some picnic parties out to the Sultana and later on took a fishing outfit down to Quarry Island.A tow of 15,000 logs was taken to the Keewatin tie mill on Wednesday by the Shamrock, brought in from Grassy River.
The Day Star, the Presbyterian mission steamer, is busy these days taking out supplies to the school for the winter. She left Saturday with a big load of flour, syrup, etc.
These were among the busy fleet of steamboats that plied the Lake of the Woods for close to a century. They hauled log booms, hosted dances, took excursions, transported mining supplies, brought settlers along the route to their new homes, and dramatically changed the style of travel on Lake of the Woods.  Previous to their use all lake travel had been done by birch bark canoe, then by York boat. But with the increased traffic on what was then the only practical thoroughfare to the Canadian west, the need for faster and larger vessels was realized.
The first steamboat on the lake was owned and operated by the Canadian government and was put into service in 1872 as a tug to pull York boats through the two sets of rapids on the Rainy River. The nameless steamer was joined a year later by another and then another which was christened Lady of the Lake. These first steamers were engaged in passenger service, conveying settlers from Rainy River to Rat Portage (now Kenora, Ontario), or west via the North West Angle and the Dawson Trail. The Lady of the Lake, at 115 feet in length, was a side-wheeler that ran the route until she was dismantled in 1880. Many of her parts, however, were used in the construction of another steamer, the Lilly McCauley. The Shamrock, Monarch, and Highland Maid all ran the passenger route between Fort Frances and Rat Portage. Their one-way fare was $6.00 for adults (which included meals), $3.00 for children, $5.00/head for cattle and horses, $8.00/ton for household goods, and $10.00/ton for supplies. The round trip could be made in less than 48 hours – each leg of the trip averaging about 21 hours with layovers to pick up and discharge passengers. Because the trip could not be made without refueling, there were wooding stations located along the main steamboat routes where the boats could pull in and stock up on wood.
The passenger boats eventually began to offer leisure tours and in doing so initiated the first attempts to attract tourists to the lake. As the industry of the region expanded beyond the original base of fur trade into commercial fishing, lumbering, gold mining, and tourism, steamboats became an even more common sight on the lake.
While saw mills were becoming established in the communities of Keewatin and Rat Portage, logging camps were being constructed on all parts of the lake. In the journals of John Gardner, one the area’s earliest settlers who worked at various logging camps, the arrival of the steamboats was always recorded with an account of the number of workers brought out, the replenishment of supplies, and the delivery of much-awaited mail. The Jenny Lind, Lotta S and the Clipper were all engaged in freighting men and supplies to the camps. Other steamboats, the Empress, Kingfisher, Algoma, and Mather were used to tow the immense log booms from down the lake to the sawmills in Rat Portage.
The Sultana, Regina, and Mikado steamboats were each part of the operations of successfully run gold mines on Lake of the Woods. Their purpose was multi-fold. They were used to freight supplies, equipment, labourers, and ore. As well, potential investors were escorted out to the mines aboard the company steamers. The Scud and Frank Marshall were often seem loaded to the gills with packed fish boxes en route to Rat Portage where the fish were then shipped to market by rail. During the commercial fishing heyday of the 1890s, four million pounds of fish and a quarter of a million pounds of caviar were shipped annually from the area.
Through the course of 90 years, side-wheelers, stern-wheelers, sturdy tugboats, elegant excursion boats, and accommodating ferries plied the lake. But with the coming of the railway, roadways, and diesel and gasoline engines, one by one the steamboats fell into disuse, bringing an end to this significant era on Lake of the Woods. The steamboats met their ends in various ways. The Couchiching, a steam tug, was built in 1883, abandoned on the sandbar at Bush Island in 1897 and ten years later was dynamited into oblivion. The fish boat Keewatin and the ferry Kennina both burned. The Speedwell was wrecked on a reef. Others simply outlived their usefulness and were dismantled and sunk. The remains of some of those early boats are scattered along the lake bottom off various islands and in numerous bays and provide intriguing exploration for divers. They are, however, protected archaeological sites and cannot be disturbed.
SIDEBAR
The Annie Mac, a ferry between Rat Portage, Norman, and Keewatin, was jokingly called “Consumption”, because her exhaust “sounded as if it were the last gasp of a diseased lung.”The Clipper was reputedly the fastest boat on the lake, and the first boat on the lake to have electric lights.  The 75-foot Edna Brydges was launched in 1895. She could accommodate 60 passengers in style. White linens, silverware, and caviar were dining room staples.  The Kathleen ran “blueberry excursions” on the Winnipeg River. During these outings lunch could be obtained on board or, for those who brought their own picnic basket, hot water for tea was available.