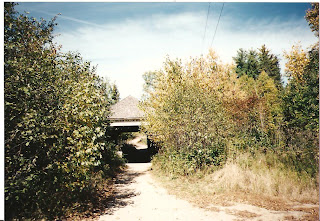 On a trip in 1995 I took this picture on the way from Maine to Nova Scotia.  Today I scanned in one of the pictures I took of a covered bridge.  I had no idea at the time that it was quite the landmark.  Being curious about the name on the bridge I found some pictures of it taken in 2008 and some interesting facts.
No longer in service, this covered bridge at Nelson Hollow, just 4 km outside of Doaktown, is the oldest covered bridge in New Brunswick and the only one remaining in Northumberland County. Also known as the Mill Brook #5, this covered bridge traverses Bett's Mill Brook.


On a sign posted over the entrance to the bridge is the warning:
$20 fine for Driving on This Bridge Faster Than a Walk

These pictures were taken in 2008 I found them on a web site called New Hampshire Covered Bridges or you can find it by entering the the term Nelson Hollow Bridge. 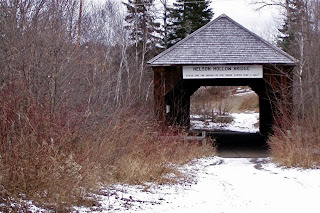 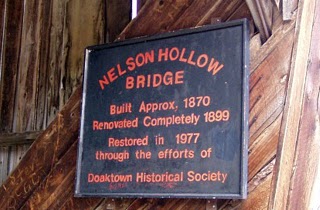