The Isle of Purbeck and My Grandfather Edmund James Ash 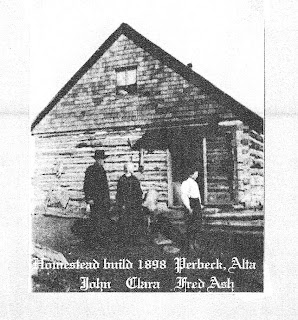 ﻿This picture shows a different spelling than the Purbeck of Dorset, England but John C Ash and his brother Edmund and their parents would no doubt have a good knowledge of the type of clay that made it famous, at least for Josiah Wedgewood, called ball clay discussed in the following article.
I have no proof but if the land they homesteaded on bears any resemblance to Saskatchewan's gumbo clay then it makes perfect sense.
﻿
The Isle of Purbeck, not a true island but a peninsula, is in the county of Dorset, England. It is bordered by the English Channel to the south and east, where steep cliffs fall to the sea; and by the marshy lands of the River Frome and Poole Harbour to the north. Its western boundary is less well defined, with some medieval sources placing it at Flower's Barrow above Worbarrow Bay.[1] The most southerly point is St Aldhelm's or St Alban's Head. It is suffering erosion problems along the coast.
The main concentration of ball clay in Dorset is to the north of the Purbeck Hills centred around Norden. Ball clays are sedimentary in origin.
Purbeck Ball Clay has been used for thousands of years, but large scale commercial extraction began in the middle of the 18th century and continues today. The principal workings were in the area between Corfe Castle and Wareham. Originally the clay was taken by pack horse to wharves on the River Frome and the south side of Poole Harbour.[1]
Large quantities were ordered by Josiah Wedgwood from 1771 and this led to the construction of Dorset's first railway in 1806. This was the Middlebere Plateway, which connected clay workings owned by the London Merchant Benjamin Fayle in the Corfe Castle area, to a wharf on Middlebere Creek in Poole Harbour. Other similar tramways followed, including the Furzebrook Railway (c.1840), the Newton Tramway (1854), and Fayle's Tramway (1907). With the coming of the London and South Western Railway line from Wareham to Swanage in 1885. 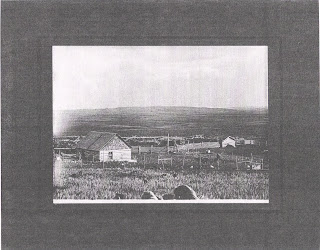 The Ash farm at Perbeck, Alberta, Canada.
Posted by DeltaJoy at 6:16 PM