THE THIRD HORSMAN IS RIDING 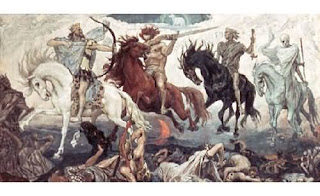 Although many may be surprised by the following dire predictions by Oxfam it comes as no surprise to those who are aware that the four horsemen have been riding since 1914, the black horse representing the growing global problem of famine.

Oxfam called on Tuesday for an overhaul of the world's food system, warning that in a couple of decades, millions more people would be gripped by hunger due to population growth and climate-hit harvests.

A "broken food system" means that the price of some staples will more than double by 2030, battering the world's poorest people, who spend up to 80 percent of their income on food, the British-based aid group predicted.

"The food system is buckling under intense pressure from climate change, ecological degradation, population growth, rising energy prices, rising demand for meat and dairy products and competition for land from biofuels, industry, and urbanization," Oxfam said in a report.

It added: "The international community is sleepwalking into an unprecedented and avoidable human development reversal."

Noting that some 900 million people experience hunger today, Oxfam said the tally of misery could rise still further when a "perfect storm" struck a few decades from now.

By 2050, the world's population was expected to rise by a third, from 6.9 billion today to 9.1 billion. Demand for food would rise even higher, by 70 percent, as more prosperous economies demanded more calories.

But by this time, climate change will have started to bite, with drought, flood and storms affecting crop yields that, after the "green revolution" of the 1960s, had already begun to flatline in the early 1990s.

The price of staple foods such as corn, also known as maize, which has already hit record peaks, will more than double in the next 20 years, it predicted.
Posted by DeltaJoy at 4:53 PM

Email ThisBlogThis!Share to TwitterShare to FacebookShare to Pinterest
Labels: FAMINE