THE NIGHT I SLEPT IN THE PANTRY 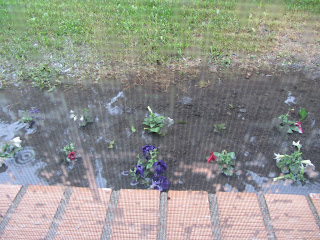 We had 4 inches of rain yesterday in less than 24 hours.  This is just outside my window, the flower bed about 2 1/2 feet from the building and the plants are nearly covered with water. 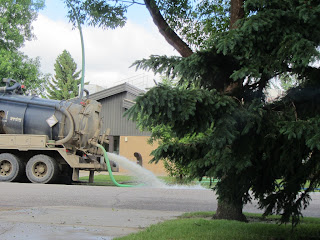 This is a very large, noisy oil field truck pumping out the basement of a nursing home across the street as I look out my bedroom window.  They started at about 11 AM and never quit.  The noise was awful, and unrelenting it near drove me crazy.  If you ever heard one like it for 12 hours you'd understand that the sound was constantly undulating and whiny.  Much like me today.  I tried earplugs and blasting the TV or music on my laptop which only helped somewhat and I even set up shop with a little TV and my laptop in the room farthest away but nothing helped at all.
The picture below shows where I slept last night with the help of a little fan sitting on my kitchen table to get a little air movement. The only 'room' that the noise did not get into........my pantry. 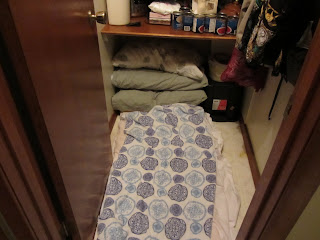 The truck disappeared sometime after midnight and has not come back as of yet.  We had one brief heavy downpour this afternoon.  Many, many basements were flooded in this fourth rain event of June, many manholes were spouting water pretty high this morning and some had sandbags on them and some didn't when we went by.  One of my friends who lives in an apartment says when she got home from work yesterday there was 3 feet of water in the basement so they had no heat and no flushing for everyone there.  In another part of town, condo basements are flooded and another friend's sewer backed up and she had nearly a foot of water which killed her freezer and sent everything down there afloat.  The last I saw here she was taking her 'floating' laundry piles to a friends place to wash.  There are two centers set up for evacuees now.  The highways are closed again as there is water over them, all traffic is diverted through town and 70% of that traffic are semis which made for a lot of sitting at stop signs today as the long lines wound their way through.  There also is a boil water advisory.  Construction, farming and oil field activities have ground to a halt.  They predict that road bans will be on until the middle of July.....unheard of.
Who could have ever predicted that the prairies would become disaster area due to water?  Strange and never-before-happenings are going on everyday around the world.
Posted by DeltaJoy at 9:32 PM

Email ThisBlogThis!Share to TwitterShare to FacebookShare to Pinterest
Labels: Flooding 2011