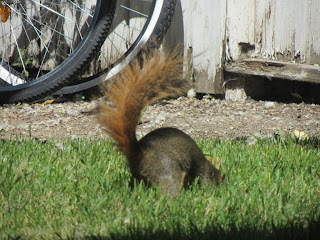 Just when I thought I might have been a little harsh on the rodent IQ remarks I made yesterday I now have NO doubt whatsoever it's one and only brain cell had already been used up for the year.  This is the squirrel's third attempt at trying to bury a peanut in the bathmat-sized piece of lawn we have the back of the apartment.
Let me give you a little background noise on the ongoing squirrel wars around here.  For the past three years the resident squirrels and I have been have a running battle about where they should or should not hide their peanuts which SOME of my kindly neighbors insist on buying for them.
The first year I was tolerant of the cute little things furtively stashing their winter supplies even if it was in my pots and planters....... awwwwwwww isn't that sweet?
Year two and the battle heats up when the little rats with furry tails started tossing dirt and pansies right out of the pots on their pretty little heads.  Well that was enough for me!!! I thought I'd get creative 'naturally' and started sprinkling some pepper into the pots.  Didn't work.  So I mixed the pepper with cayenne.  Didn't work.  Mixed pepper, cayenne and paprika...........DIDN'T WORK.
Year three (which we will forever affectionately call The Year Of The Flood), had such a late start that some were asking me if I was going to plant anything this year.......Jokingly I said, "yes onions and garlic".  Well that idea must have rattled around in my considerably larger than a squirrel's brain long enough to actually sprouted into an idea........ freeze dried garlic!  From the very first application the little rats now only come for a sniff once in awhile.
I have emerged VICTORIOUS over....ummm......rodents!!!!  Okay so it's not Nobel Prize territory but it's MY territory now..............garlic anyone?
Posted by DeltaJoy at 6:29 PM