BTW HOW DID YOUR WEEK GO? 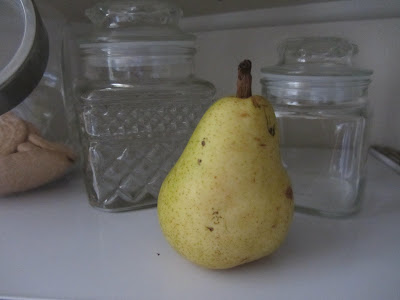 Such a lovely pear sitting on my microwave awaiting it's fate.

For some reason this week has been one of those weeks where a whole bunch of things crop up that just have to be dealt with sandwiched in between routine things of the week.
Monday had a list that included muffins, a bed and my new glasses.  I had just enough of a zucchini to make another batch of Chocolate Chip Zucchini muffins 18 to be exact.  Seven weeks ago I ordered a bed from a local business and deciding enough was enough went down and cancelled it and got my down payment refunded.  Then I went and got my new glasses adjusted and that was just the morning.  In the afternoon I visited 4 of my friends and another popped in to make it 5.  My energy expended I called it a day.
Tuesday I washed a load of clothes and hung a quilt out to air after all it looks as if I'll be needing it soon with temperatures in the single digits this week over night.  Spent the rest of the day doing some reading and writing some cards.
Wednesday was a full morning writing and printing letters which I do every month plus one of a more personal nature and doing another load of clothes.  I was out the door again for I had an errand to do on the other side of town, drop off a letter on the way, then go to the post office and because I forgot my grocery list had to go home for it and then back downtown to the store for the groceries.  In the coffee shop I stopped and had a little chat with two old dear friends then went home and made corn bread which was frankly awful and dumped it.
Thursday it stormed all night which plastered my clean car with dead leaves that look like they had gone through a mulcher.  I visited with a lady at 10, went for coffee and my friend gave me some garden produce after I drove her home.  I badly needed a nap in the afternoon but everyone in the apartment decided to come and go multple times accompanied by a lot of noise.  Scratch the nap.  Went out to a regular Thursday evening get together for 4 or 5 of us girls and didn't get home until 9.
Friday wasn't much slower either.  I went out at 9 to pick up a few sale items at the grocery store.  From there I went and washed the car then visited the phone company who had wrongly charged me $10 for a service charge.  After lunch I made another cornbread using a different recipe of course and it turned out perfect.  Well as it happened I found out some folks had an surge of out-of-town family and I sent 8 pieces over to them plus 1 piece for the friend who delivered them along with her baking powder biscuits, then took 2 pieces upstairs to friends, which left two pieces for me and a pan to wash.

I will be out both mornings on Saturday and Sunday and just got a text message invitation to join in some singing Sunday afternoon.
I really hope to squeeze a nap in there somewhere. I need a job so I can get some rest for Pete's sake!!

Email ThisBlogThis!Share to TwitterShare to FacebookShare to Pinterest
Labels: PEAR