Line-Up for Yesterday
A is for Alex
The Great Alexander;
More goose eggs he pitched
Than a popular gander.
— Ogden Nash, Sport magazine (January 1949)

Grover Cleveland Alexander was one of the greatest pitchers in history who played for two decades in major league baseball.  His story was on Turner Classic Movies {TCM} today in the movie THE WINNING TEAM portrayed by Ronald Reagan in 1952.  He won the 1926 World Series against the New York Yankees pitching as a St. Louis Cardinal in arguably his best game ever.
Alexander was born in Elba, Nebraska, one of thirteen children. While overcoming the setbacks of epilepsy, hearing loss, and double vision, the man they called "Old Pete" compiled 373 victories, ranking third behind Young and Johnson.
His biography is worth the read from history making feats on the mound to the answer why and how his eyesight and hearing were damaged. 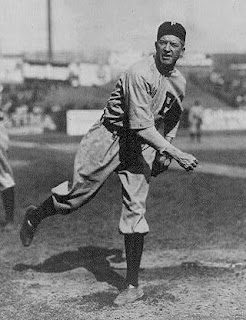