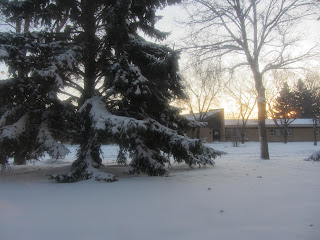 It's depressing.  After the nicest October in living memory we get this??  Yes I know it's time but it's always a downer when reality flies in your face, literally!  Actually once the season gets along and I get used the boots and jackets, scarves and mittens, I like winter.  It's a quieter season, car noises are muffled and there just isn't the hustle and bustle and goings on outside when it gets cold and that's just fine by me.  I watched a young man trying to clear the snow off his truck on the street.  He searched long and hard for the scraper/brush with no avail.  He sat in the truck and turned the wipers on and off many times without much success.  So two of them sat there for a long time doing that and no doubt discussed the wisdom of preparedness......hey it's NOVEMBER not September.  Suddenly someone must have remembered how well a credit card works in an other-than-financial emergency situation and after using a little elbow grease they were gone.
But I love the winter scenes that snow makes especially after a storm and the sculpting of snow drifts with shadows in the bright sun are immensely interesting, photographically speaking, and just plain beautiful from a nature lover's perspective.  For now I just scowl out the window at the procrastinating squirrels as they scurry by looking for that last peanut handout before they curl up for the winter which is such a good idea.
Posted by DeltaJoy at 9:29 AM