AN ICE DAM IS NOT A GOOD THING 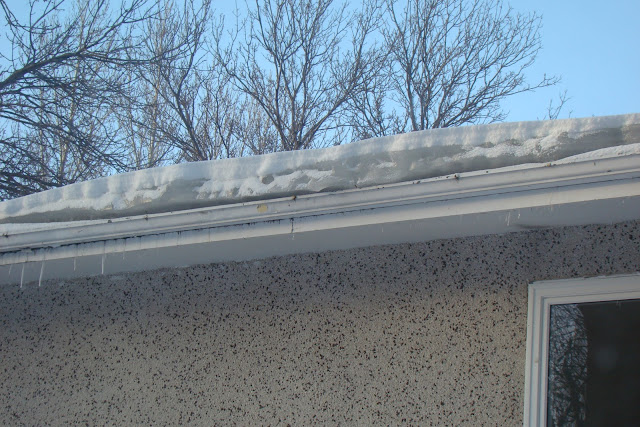 If you didn't know what an ice dam was before, you know now.  This is a picture that I took through my bathroom window of the duplex next door.  The lady has just moved out in the middle of February because it was leaking inside.   This month we have a lot of snow then quite a few above average temperatures with a lot of melting.  Despite the landlord's belated and feeble attempt two weeks ago to remove the snow he couldn't get at the ice.  The melting snow and ice has nowhere run except back under the shingles and it will start to leak into the interior of the dwelling.  Eventually the fascia and soffit will rot which leads to their failure and the eventual loss of the eaves.  Obviously the sagging eave trough cannot do its job anymore as it's likely filled with ice by now and will pull away from the structure eventually.  It's neglect pure and simple.
Homeowners and landlords need to keep on top of excessive snowfalls and promptly remove it away from the vulnerable roof areas.
This landlord will miss his rent checks for sometime I'm sure while the damage inside and outside is dealt with responsibly or as in some cases not so responsibly in order to get the money coming in again.  Hopefully he will sell it to someone who cares.

I will miss Deb and her young kitty that she had to give away in order that she could take the apartment she wanted.
Posted by DeltaJoy at 5:30 PM