Ryerson Publishing and The Methodist Church In Canada 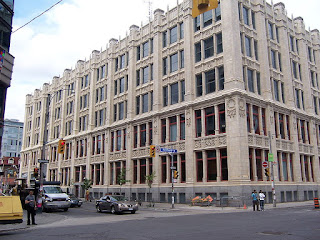 299 Queen St Toronto Ontario Canada
When the Methodist Church - later to become the United Church of Canada - was seeking a new home for its administrative offices, presses and bookrooms in 1914, it decided to build on property bound by Queen, Richmond and John Streets. They acquired the land and raised the Wesley Building. The Churches' printing operation was called The Ryerson Press after Egerton Ryerson, a pioneer Methodist circuit rider who established Canada's first publishing company, laid the foundations for our free public school system and set up the country's first university. By the time the Church offices moved into the new headquarters in 1959 the Ryerson Press had become a self supporting and profitable business. In the 1960's the Ryerson Press experienced financial difficulties. The American company McGraw Hill bought the company in the early 1971's & the Church put the building up for sale. Subsequent owners leased space to various artists and artisans as well as Toronto's more interesting cultural organizations and individuals. Today the building remains the finest example of Industrial Gothic Architecture in Toronto and is designated under the Ontario Heritage Act.
The Ryerson Press, one of Canada’s most important book publishers during the twentieth century, was the general trade publishing arm of a much larger Toronto-based printing, bookselling, and publishing operation known in its entirety as the Methodist Book and Publishing House (MBPH). After the church union of 1925, which brought together the Methodist, Presbyterian, and Congregational Churches into the United Church of Canada, the overall operation was known as the United Church Publishing House. From 1919 to 1970, numerous educational, historical, and literary titles appeared under the Ryerson Press trade imprint, authored by such prominent Canadians as A.R.M. Lower, Earle Birney, A.M. Klein, and Alice Munro.
The adoption of “The Ryerson Press” as the trade book imprint of the MBPH on 1 July 1919 marked a significant transition for the Toronto company. Prior to 1919, the MBPH’s primary concern in terms of original publishing had been denominational in focus, with an emphasis on periodical rather than book production. The Reverend Samuel W. Fallis (1866-1932), who had become book steward (general manager) of the MBPH in June of that year, broke with tradition when he chose a distinctive imprint for the MBPH’s general trade books. Since the early nineteenth century, it had been the house’s practice to use the name of the overseeing book steward as the imprint on books produced for trade sale. Fallis’s immediate predecessor, the Reverend William Briggs (1836-1922), had held the position of book steward for forty years, during which time he expanded the entire business considerably and imprinted the name “William Briggs” on the consciousness of two generations of Canadian booksellers and readers.

Email ThisBlogThis!Share to TwitterShare to FacebookShare to Pinterest
Labels: Religious History in Canada