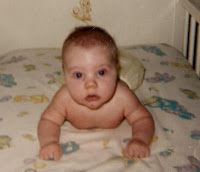 I think this is very important for new moms or moms-to-be to know about.  It may be one way to reduce obesity and risks associated with it.
Babies raised on formula who start eating solid foods before they are 4 months old may be more likely to become obese than those who start later, suggests a new study.
The findings support U.S. guidelines that say parents should wait until babies are between 4 and 6 months old to start feeding them solid foods, said Dr. Susanna Huh, one of the study's lead authors from Children's Hospital Boston.
"Adhering to those guidelines could reduce the risk of obesity in childhood," she told Reuters Health.
Previous studies have shown conflicting results on whether the age at which babies start eating solid foods is related to their chance of being obese a few years down the line. Especially among babies who are raised on formula, the transition to solid foods might mean a jump in the amount of calories they are consuming - before parents have learned how much energy their baby really needs.
In the current study, Huh and her colleagues tracked about 850 babies and their mothers over 3 years. When babies were 6 months old, researchers asked the moms whether they had breastfed - and if so, for how long - and when they started feeding their babies solid foods, such as cereal, fruit, and dairy products.
When kids were 3 years old, the researchers measured their height and weight to determine which kids were obese, defined as being in the highest 5 percent of their age and gender for body mass index (BMI), a measure of the relationship between weight and height.
For babies who were breastfed for at least four months, the age that they first received solid food - before 4 months, at 4 or 5 months, or 6 months or later - had no effect on whether they were obese at 3 years. Regardless of when they started eating solid foods, breastfed babies in the study had a one in 14 chance of being obese as preschoolers.
But the findings, published in the journal Pediatrics, were different among babies who were formula-fed from the beginning, or who stopped breastfeeding before they were 4 months old.
Those babies had a one in four chance of being obese at age 3 if they started eating solid foods before they were 4 months old. If parents waited until between 4 and 5 months, the kids' chances of being obese were one in 20.
The chance of being obese increased again if babies didn't start eating solid foods until they were at least 6 months old, but there were too few of those babies for the authors to make a firm conclusion about the risk of waiting longer to feed a baby solid foods.

Both in the U.S. and around the world, doctors have been promoting the importance of breastfeeding in the first 4 to 6 months of life. However, in the U.S. about half of babies are breastfed for less than 4 months, or not breastfed at all, according to the Centers for Disease Control and Prevention.
Breastfeeding itself cuts down on a baby's risk of being obese. For those babies who are raised on formula, it seems to be especially important that parents wait until babies are at least four months old to feed them solid foods, researchers say.
While parents may have more difficulty determining the right amount to feed a baby who isn't breastfeeding, it could also be that "the way that infants feed and learn to feed influences their obesity risk," Huh said.
Dr. David McCormick, a pediatrician at The University of Texas Medical Branch at Galveston, said that the most common problem he sees is parents adding cereal to formula without thinking about the extra calories they are feeding their baby.
"I think that's what a lot of people are doing unknowingly, thinking that the baby will be healthier or grow faster," McCormick, who was not involved in the current study, told Reuters Health
Posted by DeltaJoy at 7:23 PM