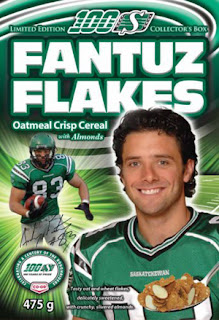 Andy, Andy, Andy what are we going to do for breakfast now???
In 2010 Saskatchewan Co-op Food Stores came out with a special "Fantuz Flakes" cereal  featuring slotback Andy Fantuz's portrait on the box. The cereal flew off the shelve, selling out in just seven hours. For many, that provided proof of the Riders' amazing market dominance and incredibly fervent fanbase. For some, it provided proof that Canadian players really can be top-tier stars in this league.  Fantuz has done that on the field as well.
The Saskatchewan Roughriders are moving forward without slotback Andy Fantuz, who signed Friday with the NFL's Chicago Bears.
The Riders have been preparing for that scenario since the end of the 2010 CFL season, which was Fantuz's best in five years in the league. Fantuz capped the year individually by being named the CFL's most outstanding Canadian. Fantuz, 27, led the CFL with 1,380 receiving yards. He had 87 receptions and six touchdowns.

It is bad and sad news for the Saskatchewan Roughriders and the fan base, which is all of the province by the way, but I sincerely hope the 2011 NFL season will benefit from his addition to the ranks and that he has a truly satisfying career no matter where he is.