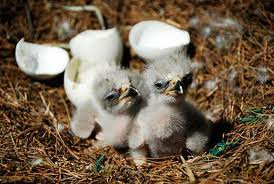 This is the most awesome and addicting thing I've ever had to pleasure to enjoy!~!  This is a nesting pair of American bald eagles near a fish hatchery in Decorah, Iowa.  There are two chicks, the second one hatched Sunday and the older one is already much stronger and aggressive, and one egg left to hatch.
To watch one of the most fearless killers of the air tend to their parenting duties with such extreme patience and tenderness is beyond words.  They both take turns sitting on the nest, when one returns the other leaves.  When they settle on the nest they take such care doing so, shifting from side to side many times and you can see those yellow feet with big talons inching ever so slowly forward, nudging the newborns out of the way gently enough to set down in the nest finally.  Then she or he will pull nesting material from in front and tuck it under their breast maybe to seal the babies from a draft or as in one instance I saw that the chicks were too far out front.  By doing this the parent was able to push them back to safety and warmth without perhaps skewering them on that dangerous looking hook at the end of its beak.
He is better groomed than she is, she looks quite ruffled and acts more nervous than him when on the nest.  She continually looks around in every direction even up.  You would think that living in the penthouse suite she would feel a little more secure!  I think he dozes off once he shifts around enough to make his own suitable indentations.  What an education just in a few short hours, fascinating and enjoyable.

When they bring food in its carefully fed to each one in tiny little pieces of meat or fish.  Some are quite choke-worthy I thought!!  Once when papa came back he tried to feed the weaker, younger one a morsel so huge there was no way it could even get a piece off of it.  He very quickly understood and shredded it enough for the little one.  Once when one of the babies was less than enthusiastic to eat any more she would continue to poke the food at it as many as ten times until it took it and then she was satisfied that it had enough and went to the other one.  Talk about patience.

As I watched all this unfold today the thought crossed my mind that something had to die for those tiny bits of life there in the nest and in countless nests everywhere.  Also something had to die for her and for him in order to perpetuate life.   Those thoughts also led me to what time of year this is and the fact that someone also died for us to give us life.  Profound and awe-inspiring indeed..

As the video streams into my living room it's as if my own window is open.
As I watch it I can see and hear the occasional car and truck drive by but mostly I can hear the other birds singing in the area.  I've heard an owl, a dove, red winged blackbirds, even some kinds I can't identify, some geese returning and of course the ubiquitous sparrows.  The semis tend to break the mood though, thankfully that's infrequent.
I've been thoroughly entertained this morning and I'm looking forward to seeing the third bird hatch sometime today or tomorrow as they have predicted.
Posted by DeltaJoy at 12:22 PM