1947 Extreme Snowfall Across the Canadian Prairies 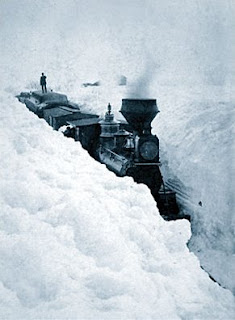 The above 1947 picture from Minnesota, U.S.A. is like a picture I belonged to my parents but now cannot not find.  My  pleas on Facebook have so far have yielded no results and neither has extensive internet searches.  Surely I didn't have the ONLY Canadian image of the train buried in between snow drifts higher than the telephone lines?

Extreme Weather in Canada - The Canadian Encyclopedia: "The worst blizzard in Canadian railway history occurred between January 30 and February 8, 1947, when 10 days of blowing snow buried towns and trains from Calgary to Winnipeg. Some Saskatchewan roads and rail lines remained impassable until spring. Children stepped over power lines on their way to school and people dug tunnels to their outhouses."

We have a ways to go this year before there is any comparison to 1947.   However worry lines are already beginning to appear across the brows of many a civic leader on the prairies well before spring.  The idea is that being proactive is the smarter thing to do rather than mop up the consequences of being ill prepared.  "Be prepared to fill sandbags" said one report, and another spoke of the monies that are now being earmarked in January for berms and levies.

Time will tell of course just how effective and 'proactive' humans really can be given that the powers of nature can never be predicted.
Posted by DeltaJoy at 4:33 PM