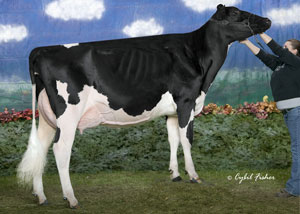 When this beauty, Missy for short, which was owned by Morsan Farms in Ponoka, Alberta sold for $1.2 million in Uxbridge , Ontario, on November 11, 2009, jaws dropped all over the world.  The 3-year-old Holdstein fetched one of the highest prices ever paid for a cow.  Genetically speaking she is a perfect cow which is why chances are you will never drink a glass of milk from Missy.  Her real value is in her ovaries and, now, in her good name.  Missy's notoriety has enhanced our nation's already excellent reputation for cattle breeding.  Speaking of milk, Holsteins are known for their ability to produce large amounts of excellent milk, and top milkers can produce more than 65,000 pounds (7,550 gallons) of milk per year.

Tips on Cow Tipping
Country folk have long amused their city friends with tales of cow tipping.  The story goes that one person can knock over a cow that's standing asleep in a field just by giving it a push.  University of British Columbia professor Margo Lillie says that this is not true.  She and one of her students proved that the physics of cow tipping just didn't add up.  Another thing: Cows don't sleep standing up.  And, contrary to their docile image, cows are well aware of what's going on around them and are hard to sneak up on.
However, if you absolutely have to tip a cow, never leave more than 10%.
Posted by DeltaJoy at 10:29 PM