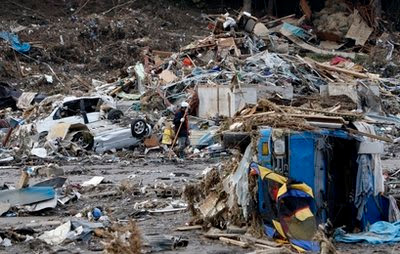 In the Daily Mail from the Uk comes this by Richard Littlejohn:
Japan is an advanced, wealthy nation, which will recover and rebuild over time. It doesn’t need our money.


I disagreed with this comment yesterday because
Mr. Littlejohn completely forgot about the third chapter of this compound tragedy.  If the radiation threat becomes reality by the looming possiblity of the nuclear reactors meltdown there will be unimaginable suffering for many, many years with a huge burden on the health care system. Radiation is already in the water coming out of taps in people's homes.  There will be no food exports.  There will be no exports of any commodity that absorbs radiation.  There will be no tourist dollars.  It means economic disaster for Japan.

He spoke of his wife's grandfather and the hatred he had for the people of Japan due to the atrocities committed in WW ll POW camps and that her grandfather would not remove his hat for a minute of silence for Japan.  Past hatreds belong in the past.
This is today and in any great humanitarian crisis all people deserve our support, our compassion and our money regardless of race, color or creed.