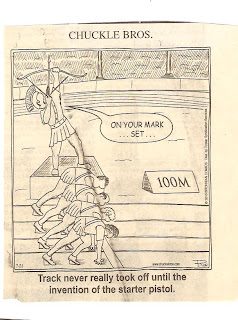 ﻿
I haven't had any problems getting permission to post a cartoon when I approached a couple of Canadian cartoonists but when I sent an email to Mike Baldwin for his work called Cornered it got very interesting.
What I got from his agency was a full page 'manifesto' listing three different levels where my request might fall and if I would be making money from this and so on and so on.  Believe or not they wanted $12 American for each posted cartoon!
He's got some really good stuff and the humour reminds me of the 'Herman' cartoons that was very popular in the 80's.
I'm really sorry I won't be sharing it but ultimately it will be his loss.  Here was my reply.

LOL well my head is spinning!  I do not have any commercial intent nor do I get any gain from www.deltajoy.blogspot.com nor is it social networking.  Feel free to have a look. I think I have one follower

....my son.  I talk a lot about medical discoveries (I am a retired nurse) also genealogy thus lots of pics of gravestones and dead people

.
So you are saying I have to pay $12 dollars per image just to amuse myself one or twice?  I'll probably pass.
I am quite surprised as I recently wrote to a Canadian published cartoonist here in Canada and was give carte-blanche for only mentioning that I do have permission!
Thanks anyway for your time.
Posted by DeltaJoy at 8:29 PM