IS JAPAN UNDERSTATING CONDITIONS THERE? 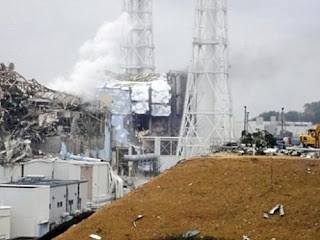 Today Japanese officials are warning of a 'possible' breach of reactor #3 and suggesting a further voluntary evacuation up to 30 kilometers or 19 miles while western countries suggest 80 k for their citizens.
Have you ever heard anything from political spokesmen that has ever not been understated particularly in cases of dire warnings in times of disaster? Two days ago they said that tap water in Tokyo was too dangerous for babies and 24 hours later they said it's okay now.  I see a lot of people wisely did not believe that 'miracle'.
What is a 'breach' anyway?  Or is that just a euphemism for meltdown?
I think things are even worse than portrayed to the world stage by those who are trying to calm the masses.  Perhaps those in the 'steering committee' of this tragic nation are scrambling to get their own personal agendas in order before the true reality of things becomes evident.

@Tokyo (CNN) --
Chief Cabinet Secretary Yukio Edano said authorities are encouraging people living between 20 and 30 kilometers (12.5 and 19 miles) from the plant to leave the area voluntarily because of the challenges they "have faced in their daily lives."
Those who live closer already have been ordered to evacuate because of dangerously high levels of radiation.
A primary challenge for that region, he said, has had to do with commerce -- namely, the difficulty in getting needed materials in and out of the area.
This is not a mandatory evacuation, Edano said.
Still, he said, he could not rule out future mandatory evacuations if radiation rises to unsafe levels.
Other nations, including the United States and England, have urged their citizens to stay 80 kilometers (50 miles) or more away from the embattled power plant over radiation concerns.
Japan has urged those within a 20-kilometer radius to evacuate and those within 30 kilometers to try and stay indoors.
Still, even those well outside the plant area are being affected by the radioactive emissions.
Traces of radioactive iodine tied to the plant have been detected as far away as Sweden and the United States. Authorities have said those levels are far below what's considered harmful to humans.
Two Japanese citizens -- one from Nagano and the other from Saitama, both 200 kilometers or further from Fukushima -- traveling to China were taken to a hospital after showing exceedingly high levels of radiation, China's state-run Xinhua news agency reported.
A spokesman for Japan's embassy in China said Friday that the two are "fine" having left the hospital and joined their tour group.
"Abnormal radiation" was also detected earlier on a Japanese ship, Xinhua said.
But in Japan, radioactive materials detected in water, food and elsewhere have had a major impact. The number of banned food items is growing regularly, and has affected not only consumers, but farmers who rely on the products to make a living.
One chief concern is the presence of radioactive substances in tap water.
Posted by DeltaJoy at 7:26 AM