HAVE YOU SEEN THIS MAN??? IT WOULD BE HARD NOT TO! 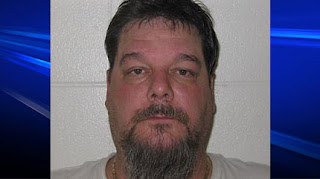 The Canadian Press
Date: Sunday Mar. 13, 2011 4:43 PM ET
EDMONTON — The sister of a murderer who escaped custody in Alberta has been arrested and is accused of helping her brother.
RCMP say Sandra Lynn Myshak, 47, of Edmonton faces seven criminal charges that include assisting a person escaping custody and aiding in a kidnapping with a firearm.

William Wade Bicknell, 42, made his escape last week by taking a guard hostage during an escorted temporary absence from the Drumheller Institution north of Calgary.
The guard was released but Bicknell is still on the loose and police say he is armed and considered dangerous.
Police allege Bicknell visited his sister during his escorted absence.
Bicknell has been serving a life sentence since 2003 for the beating death of Angela Steer, who was from Maple Ridge, B.C.
He is 6-foot-6, and weighs 402 pounds.

I only have one question...Why would this convicted murderer, the size of two men at 402 pounds and 6 foot 6, be allowed to be escorted by just one guard?

Police have said Bicknell had visited Edmonton while on his temporary absence, and that he overpowered his lone guard while on the return trip to prison. He took control of the vehicle, police allege, and then made his way back to Edmonton with the guard as a hostage.
He picked up guns and ammunition along the way, police say, and then drove with the guard to a rural home in the Chipman area northeast of Edmonton, where he forced his way into the home and took the keys to a car. He then left the homeowner and the guard behind, but disabled the phone and warned them not to call police.
RCMP haven't said how Bicknell acquired firearms.

Taniguchi said police are still looking for the vehicle Bicknell was last seen driving on Thursday, a 2009 grey Chevy Impala with licence plate CXE 602.
He said police had received a limited number of tips on Bicknell's whereabouts, are hoping the public can still help police locate him.
Posted by DeltaJoy at 12:58 AM