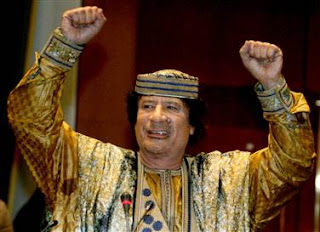 As soon as the UN announced a No-Fly Zone over Libya, just like a snake poked with a stick, Ghadafi reacts immediately.  Now he will act like a chameleon and buy time and regroup to focus his next offensive move.  It's laughable to think that he has his hands raised waving a white flag.
He will pull back but only for enough time to cool things off somewhat.  Then he will then come back with the same old behaviors but at a more tolerable level for the war-weary world states that think they are the keepers of the gates of world peace.
This has been seen before and very is predictable and standard procedure when dictators find themselves painted into a corner.
He is calling the shots once again.
Posted by DeltaJoy at 8:06 AM

Email ThisBlogThis!Share to TwitterShare to FacebookShare to Pinterest
Labels: Libya