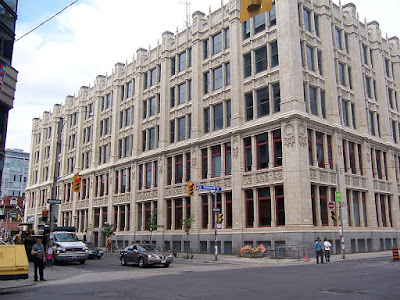 299 Queen Street West, as seen from the corner of Richmond and John Streets.
299 Queen Street West, also known as CTV Queen Street is currently the corporate head office CTVGLOBAL (CTVGL).  The building previously served as the headquarters of CHUM Television, until CTV acquired CHUM in 2007, and was once known as the CHUM-City Building.
With its 1913  neo-Gothic terra cotta façade, the building is designated as a heritage property by the City of Toronto's Heritage Preservation Services under the Ontario Heritage Act and has served as a broadcast facility since 1987.
The building houses various CTV-owned media outlets previously owned by CHUM, such as Bravo!, BNN, CP24, The Comedy Network, Comedy Gold, E!, Investgation Discover, MTV2, MuchMusic, MuchMore and Space, as well as the master control operations for the A-Television stations in Southern Ontario.  CTB's entertainment news program eTalk has been produced at the building since 2008.
Tours of the facilities are held regularly.
This building was once the headquarters of the Methodist Church in 1919.  In 2004, 299 Queen Street West was then known as the CHUM-City Building.  The CHUM and Citytv signs were removed after CTV took control of CHUM.
The five-storey building was originally constructed as the headquarters of the Methodist Church of Canada in 1913 by Burke, Horwood and White. The Methodists joined with two other denominations to form the United Church of Canada in 1925, for which the building served as the headquarters until 1959. By this time the Ryerson Press, originally the publishing arm of the Methodist Church, had grown to occupy the entire building. The building was purchased by CHUM in 1985, and was re-opened in May 1987 as the new headquarters for the company and its various outlets, including Citytv Toronto (which was previously located at 99 Queen St. East).
When the Methodist Church - later to become the United Church of Canada - was seeking a new home for its administrative offices, presses and book rooms in 1914, it decided to build on property bound by Queen, Richmond and John Streets. They acquired the land and raised the Wesley Building. The Church's printing operation was called The Ryerson Press after Egerton Ryerson, a pioneer Methodist circuit rider who established Canada's first publishing company, laid the foundations for our free public school system and set up the country's first university.

By the time the Church offices moved into the new headquarters in 1959 the Ryerson Press had become a self supporting and profitable business. In the 1960's the Ryerson Press experienced financial difficulties. The American company McGraw Hill bought the company in the early 1971's & the Church put the building up for sale. Subsequent owners leased space to various artists and artisans as well as Toronto's more interesting cultural organizations and individuals. Today the building remains the finest example of Industrial Gothic Architecture in Toronto and is designated under the Ontario Heritage Act.
Posted by DeltaJoy at 4:58 PM