Big Business Practices and Our Wallet 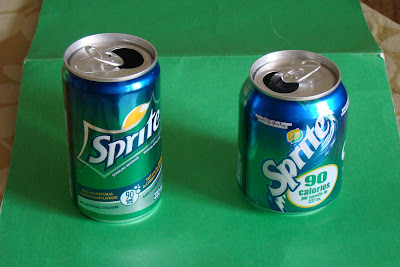 Recently I bought a 6-pack, the big spender that I am.  The company has changed the appearance of the can quite noticeably.  I liked the little squatty handful of the old style and it's contents of course and thought nothing of the change.  That is until I picked up the newer slim shape.  It felt tiny even though it looks pretty much the same....but it is 15 mls less.  Now that might not seem very much and it isn't, its only a tablespoon.  But when there is less product along with a price increase at the same time it's a ripoff.  15 mls in this case saves the company 6.3% up front so along with the price increase, the savings in materials and shipping it becomes a pretty big tablespoon full of dollar$.
Why not be the first company to be honest with the consumer and just say so instead hoping everyone will just think they are getting exactly the same product but in a new package?  Not going to happen!
Oh by the way, it does NOT taste the same.  I notice it immediately that it was not as sweet as it used to be.  Maybe squishing 90 calories into a smaller space nescessitated kicking out a few granules of sugar.
Anyone want 5 cans of Sprite?
Posted by DeltaJoy at 3:52 PM