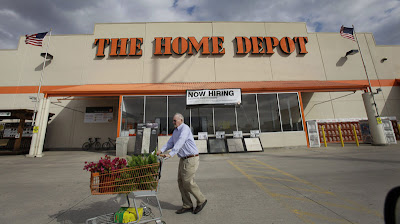 The Canadian Press
Date: Tuesday Apr. 19, 2011 6:55 AM ET
OTTAWA — Home Depot is considering banning dogs from its stores after an Ottawa-area employee says she was viciously bitten by a Shih Tzu.
Anne Riel, 39, says she had to be rushed to hospital for emergency surgery Friday afternoon after a customer's dog bit off the end of her nose.
The mother of two says she was working near the doors at the Home Depot store in Gloucester, east of Ottawa, when a woman came in with a Shih Tzu in her shopping cart.
Riel says she greeted the woman and bent down slightly to pet the pup when it leapt out of the cart and sank its teeth into her nose.
Riel says the dog's owner showed little interest as a blood-soaked Riel was loaded into an ambulance and rushed to hospital.
There, doctors had to use seven stitches to sew her skin together and another two or three to reattach her left nostril.
"My nose will never be the same again," Riel said in a telephone interview on Monday, adding that she will be seeking damages from the dog's owner.
"God only knows how many plastic surgeries I will need to even make it look somewhat normal," she said.
A Home Depot Canada spokesperson said the chain allows pets in its stores as long as they are under the owner's control.
But that policy might be changing, said Tiziana Baccega, given the recent incident.
Home Depot is currently reviewing its policy on pets, and only service animals -- such as guide dogs for the blind -- will be allowed inside the stores if a ban is put in place.
"We want to make sure that the safety of our associates and our customers is number one," Baccega said.
Baccega said she's hoping for a resolution to the issue by the end of the week.
Meanwhile, Riel says the outpouring of concern from her coworkers and from store customers has been overwhelming.
"The support has been absolutely enormous," said Riel, who came in for her scheduled shift on Monday morning because she can't afford to stay home sick.
City of Ottawa bylaw officers came to the store Monday morning and took Riel's statement, she said.
They told her they will be issuing a muzzle order to the dog's owner, as well as pressing charges that carry a fine of around $600.
Posted by DeltaJoy at 6:40 AM

Email ThisBlogThis!Share to TwitterShare to FacebookShare to Pinterest
Labels: Attack Of The Shih Tzu