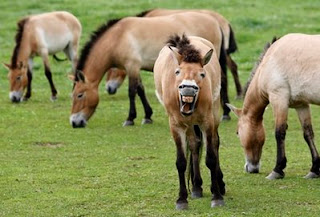 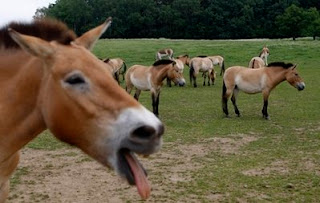 I guess it depends on where you live but it would appear that what some cultures call horses some would call asses.  Would that be tantamount to equine racism?  Perhaps 'Asian horses' would be a more
more definitive term and prevent a little visual shock.  I was going to entitle the blog  'A HORSE'S ASS?' but then thought better of it, after all looks should not define the beast and out of respect for my friends in Mongolia, seriously, I'm pleased to say that Mongolians read my blog!

KHOMIIN TAL RESERVE, Mongolia (AP) — After a long journey by plane and truck, four rare wild Przewalski horses are home in their native Central Asian grasslands.
Following a 6,000-kilometer (3,700-mile) flight and another 280 kilometers (175 miles) on trucks, the three mares and a stallion could finally roam this western Mongolian reserve.
The females — Kordula, Cassovia and Lima — and the male named Matyas arrived from Prague as part of efforts to reintroduce the species. They could join a herd of 24 reintroduced by a French organization.
Przewalski horses became extinct in the wild in the late 1960s. This is the first Czech effort at reintroducing them, following several international programs.
Posted by DeltaJoy at 7:07 AM