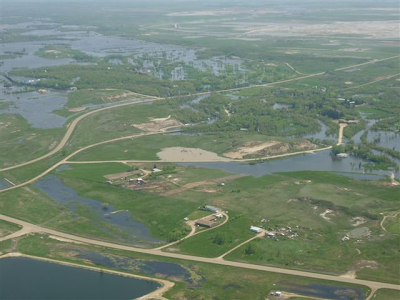 This is a picture and a note from a friend in Estevan.
Just got home from doing some sand bagging down at the golf course (& I don't even golf).
They are increasing the output from Boundary/Rafferty dams to at least 400 Cubic Meters per second which they say will increase the water level in the valley by at least 1 meter from where it is now.
To put it in perspective, the maximum release before was 211 cubic meters per second. Friends of mine who live in the valley had about 18" of water in their home from the previous release so one can imagine what is going to happen this time.
They are evacuating Ambassador Village, which is a large trailer park south of town, and I heard they are evacuating Roche Percee as well (the water was within 2" of the top of the dikes there previously. I also believe the water treatment plant will be flooded so I've stored up some water.
I'm glad I live on the top edge of the valley with a sand base under my house as many of the homeowners down here have water problems in their basements.
All this in a desert!
This is what the golf course & park looked like when the release was at 211.
The golf course is the flooded area in the upper 3rd of the picture. The water treatment plant is the building at the end of the road on the right of the picture.
Posted by DeltaJoy at 11:17 AM