A RECIPE TO TRY

From SimplyRecipes.com this looks very tempting.
I like the following blurb from the website that made me chuckle......"The first time I heard of it ("tomato pie", hmm, oooookaaaay) my brain suffered a little cognitive dissonance (never heard those two words, tomato and pie, joined at the hip like that before). Seconds after taking a bite however, I was begging for the recipe." 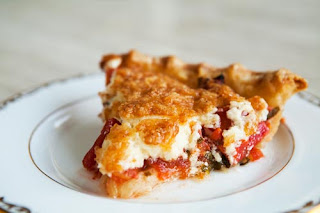 If you want to take this recipe up a notch, you can caramelize the onions while prepping the other ingredients. If you do that, double the amount of onion.

*To slice basil, chiffonade them by stacking the leaves on top of each other, roll them up like a cigar, starting at one end slice the "cigar" crosswise in thin slices.

1 Preheat oven to 350°F. Place pie shell in oven and cook for 8-10 minutes or longer until lightly golden. If you are starting with a frozen crust, you'll need to cook it a little longer. If you are using a homemade crust, freeze the crust first, then line the crust with aluminum foil and pre-bake it for 20 minutes, then remove the foil and bake an additional 10 minutes.
2 Squeeze as much moisture as you can out of the chopped tomatoes, using either paper towels, a clean dish towel, or a potato ricer.
3 Sprinkle the bottom of the pre-cooked pie shell with chopped onion. Spread the chopped tomatoes over the onions. Sprinkle the sliced basil over the tomatoes.

4 In a medium bowl, mix together the grated cheese, mayonnaise, Tabasco, a sprinkling of salt and freshly ground black pepper. The mixture should be the consistency of a gooey snow ball. Spread the cheese mixture over the tomatoes.
5 Place in oven and bake until browned and bubbly, anywhere from 25 to 45 minutes.