GIAN TENT TO GO UP OVER JAPAN NUCLEAR REACTOR

All I can say about this incredible idea is how will a tent structure prevent what a concrete structure could not? 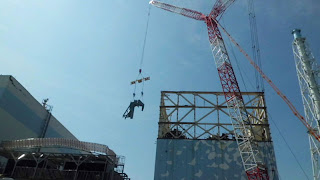 TOKYO — The operator of Japan's damaged Fukushima Dai-ichi nuclear power plant is building a huge tent to cover one of the worst-hit reactors, officials said Friday.
Officials hope the cover will keep radioactive materials that have already leaked from spreading, prevent rainwater seepage and offer a barrier from possible leaks or blasts in the future.
The tent is being erected to provide a temporary replacement for the No. 1 reactor's outer housing shell, which was destroyed in an explosion caused by high pressure the day after Japan's deadly earthquake and tsunami on March 11.
Construction of the tent and its foundation began this week, Koji Watanabe, a spokesman for the power utility, said Friday.
The work couldn't begin until now because the location was too dangerous for workers to operate in.
The tent is made up of airtight polyester. It will stand 54 metres tall and stretch 47 metres in length. It is held up by a metal frame.
Tokyo Electric Power Co. officials have struggled to come up with ways to mitigate the dangers from the plant since the disaster struck five months ago, sending reactors into meltdowns, releasing radiative particles into the environment and causing the world's world nuclear crisis since Chernobyl in 1986.
Work at the plant has been hindered by the continuing threat of radiation to workers.
Earlier this month, TEPCO said an area where potentially lethal levels of radiation were detected near Unit 1 has been sealed.
It said radiation exceeded 10 sieverts -- 40 times the highest level allowed for an emergency workers to be exposed to -- at two locations near a duct connected to a ventilation stack. The area required no immediate work and was closed off.
If the tent over reactor No. 1 proves successful, similar coverings will be constructed over other reactors on the plant. The areas around the other reactors are also highly risky to work in.
The tent is expected to be completed by the end of September, Watanabe said.
Posted by DeltaJoy at 7:49 AM