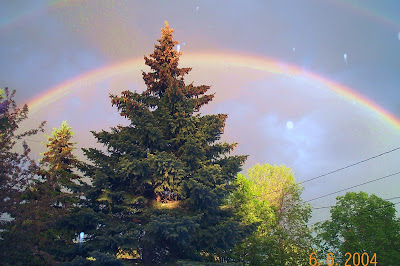 I thought a rainbow would be appropriate today in light of the fact that a rainbow usually means the storm has passed and all is well again.  Well I certainly hope that is true in relation to my recent computer 'storm'.  Three days ago I started up this laptop of mine that is not yet 4 months old to see some very odd things on my screen or rather things NOT on my screen.  The task bar had gone pure white and nothing worked.  After trying a few basic 'fixes' I had to admit defeat and take it in.
The explanation given me when I picked it up really offers no answers that I can understand.  I was told that my 'user file' was corrupted.  There were no viruses found that caused it and calls to Microsoft yielded no answer because they don't know why it happened either!  Doesn't that just instill a lot of  reassurance?  Anyway the shop explained how they replaced everything which of course didn't mean a tick to me but as far as I can see it is almost exactly the way was with everything just where I left it.  At least I wasn't charged.
One thing that is wrong and very annoying is that I have no idea whether I'm in cap lock now or not as the former annoying popup icon is missing.  Whatever happened to that smart little light that went on when in cap lock mode on my XP?   This is so maddening especially when putting in passwords only to find out that it was in cap lock and you have to start all over again..........maybe I was a little hasty with the rainbow.
Posted by DeltaJoy at 3:52 PM

Email ThisBlogThis!Share to TwitterShare to FacebookShare to Pinterest
Labels: RAINBOW