A BRIGHT IDEA DIMMING IN HINDSIGHT? 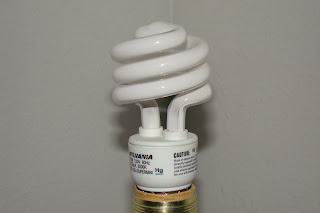 For my 100th post I have chosen a topic near and dear to me-- Our Health; how to maintain it, improve it and most importantly how to avoid anything that could have a negative effect on it.


Ever since the government created the stampede to convert and eliminate use of incandescent bulbs in favor of compact fluorescent (CF) bulbs there have been lots of rumblings over their safety.  The latest concern has to do with the effects of UV for people with Lupus and other autoimmune diseases of which there are over a million persons in Canada and of that 100,000 to 150,000 are Lupus sufferers.

Dr. Janis McCaffrey has Lupus and believes UV can trigger flare ups that can have "devastating" health implications, says the B.C. family physician.

"Health Canada has issued a warning on its website saying persons with lupus or other autoimmune diseases and certain skin conditions might be sensitive to ultraviolet radiation from fluorescent bulbs.  It says persons who believe they are suffering symptoms associated with UV should consult their doctor," she said.
"But I have been unable to find out any further information to either quantify or qualify what they are saying."
She is concerned that there is no labelling of health risks or how much adverse radiation people can expect from the new CFs.  She has contacted Health Canada for access to the research material that prompted the warning, but said Health Canada has been unable to answer her questions.

Health Canada official Leslie Meerburg says the reason there are no warning labels is that the UV emissions of the bulbs are similar to those of a regular 60-watt incandescent bulb.  Also she points out that there is no significant risk of injury to eyes or skin when used at a distance of 30 centimetres for periods lasting less than three hours and follows up with this message.....
"Should there be reason for concern regarding safety with CFs, Health Canada would investigate further, measuring the output of the device, and make specific recommendations to the manufacturer to correct any issues," said Meerburg.

Personally I am not reassured by that.  What she doesn't say in her previous comments is more worrisome I think by comparing all CFs to a mere 60-watt bulb.  Who ever used a 60-watt bulb to read with in the first place?
Also she did not say that there were NO risk of eye injury and putting a safety limit of 3 hours of use is to me extremely alarming and suggests that there was not enough research done before this was pushed onto the public.
Posted by DeltaJoy at 2:45 PM