WHO NEEDS SCI-FI WHEN YOU GOT REAL LIFE SCARY 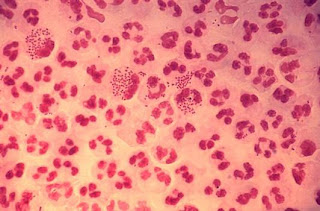 
First evidence that bacteria can acquire human genes has come to light in a new study by US researchers who found a fragment of human DNA in Neisseria gonorrhoeae, the bacterium that causes gonorrhea, one of the oldest recorded human diseases.  In a paper about to be published this month in the journal mBio, researchers from Northwestern University in Chicago, also suggest that the gene transfer is a recent evolutionary event.  This is the first time that a direct transfer of genetic material from bacteria to human has ever been recorded.  Lead author Dr Mark Anderson, a postdoctoral fellow in microbiology at Northwestern explained that we have already seen evidence that genes transfer horizontally among different bacteria and even between bacteria and yeast cells, but from human to bacterium is "a very large jump": "This bacterium had to overcome several obstacles in order to acquire this DNA sequence," said Anderson.  The discovery reveals some clues about gonorrhea's adaptability and capacity to survive in humans. The disease transmits through sexual contact and is exclusive to humans.Every year about 50 million people around the world become infected with gonorrhea, some 700, 000 of them in the US.  Although curable with antibiotics, there is only one drug recommended for treatment because the bacterium has developed resistance to the various antibiotics used to treat it over the last 40 years.  Gonorrhea hits women hard.  Untreated, it can lead to pelvic inflammatory disease, a painful condition that can leave a woman sterile or more likely to have an ectopic pregnancy if she conceives.  Also, in both men and women, there is a form of gonorrhea that enters the bloodstream and causes arthritis and endocarditis, where the heart's inner lining becomes infected.  Senior author Dr Hank Seifert, professor of microbiology and immunology at Northwestern University Feinberg School of Medicine, told the press that their discovery has evolutionary significance because it shows "you can take broad evolutionary steps when you're able to acquire these pieces of DNA".  Seifert has been studying gonorrhea for 28 years, focusing mostly on how it evades the human immune system by changing its appearance and altering the way that human white blood cells behave.  He said the Bible describes an ancient disease that sounds like gonorrhea. The fact gonorrhea can acquire genetic material directly from the host it is infecting "could have far reaching implications as far as how the bacteria can adapt to the host", said Seifert.  An ability to snatch fragments of host DNA probably helps the bacteria develop new strains, but whether this actually confers a survival advantage is not yet evident, he added.  The researchers discovered the gene transfer from human to bacteria when the Broad Institute in Cambridge, Massachusetts, sequenced the genomes of 14 gonorrhea clinical isolates and found three of them had a fragment of DNA that had an identical sequence to an L1 DNA element found in humans.  Further sequencing back at Seifert's lab confirmed this and also showed that the human sequence was present in about 11% of the screened gonorrhea isolates.  The researchers also examined a close genetic relative of gonorrhea, the bacterium Neisseria meningitidis that causes meningitis. They found no trace of the human DNA fragment, which they believe suggests the gene transfer from human to Neisseria gonorrhoeae is a recent evolutionary event.  Seifert said: "The next step is to figure out what this piece of DNA is doing."
Posted by DeltaJoy at 5:25 PM