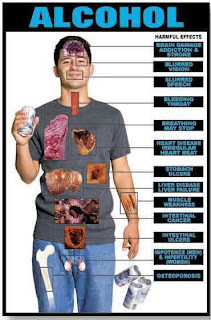 ﻿
I was amazed at the stats in the following article although I am very much aware of the consequences that alcohol brings on people, their families and ultimately on society as a whole.
Today's consensus is that alcoholism is a disease and if you support the idea that all addictions are 'diseases' then it fits in all cases.  I have some personal thoughts of my own about exactly when this happens.  There are many factors to consider in understanding the whole picture.
First and foremost there is personal responsibility.  Very early on it's the conscious personal behaviors in our culture, the so-called 'rites of passage' and gross lack of self-control that will eventually cause addiction.  There is no 'disease' until you drink yourself into a stupor so many times that it becomes so.  There are rare occurrences when only a very few drinks of alcohol can lead to addiction but the stats in the article are not talking about those cases here.

Secondly does the government have responsibility?  I think it does.  It makes $billion$ causing misery for so many and in so many ways.  The way it stands right now I feel it is basically unregulated and poorly managed.
I'd like to see alcohol controlled much more rigidly like what they are doing with cigarettes.  It is unbelievably easy for even a ten year old to get their hands on alcohol today.  Power drinks are in every grocery store and they are proving to be very dangerous.  Our children are at risk every day.

The penalties for possessing alcohol or providing alcohol to minors, irrespective of whatever age limit is in place, needs to increased to rates that will get the attention of everyone.  Parents need to be responsible for their children's behavior and if that includes penalties for them so be it.
The community as a whole bears some responsibility as well for turning a blind eye and treating drunkenness and intoxication as laughable YouTube moments.
It's not funny it's tragic.  You too may be surprised at the following revelations about alcohol.

GENEVA--Alcohol causes nearly 4 percent of deaths worldwide, more than AIDS, tuberculosis or violence, the World Health Organization warned on Friday.
Rising incomes have triggered more drinking in heavily populated countries in Africa and Asia, including India and South Africa, and binge drinking is a problem in many developed countries, the United Nations agency said.
Yet alcohol control policies are weak and remain a low priority for most governments despite drinking's heavy toll on society from road accidents, violence, disease, child neglect and job absenteeism, it said.
Approximately 2.5 million people die each year from alcohol related causes, the WHO said in its "Global Status Report on Alcohol and Health."
"The harmful use of alcohol is especially fatal for younger age groups and alcohol is the world's leading risk factor for death among males aged 15-59," the report found.
In Russia and the Commonwealth of Independent States (CIS), every fifth death is due to harmful drinking, the highest rate.
Binge drinking, which often leads to risky behavior, is now prevalent in Brazil, Kazakhstan, Mexico, Russia, South Africa and Ukraine, and rising elsewhere, according to the WHO.
"Worldwide, about 11 percent of drinkers have weekly heavy episodic drinking occasions, with men outnumbering women by four to one. Men consistently engage in hazardous drinking at much higher levels than women in all regions," the report said.
Health ministers from the WHO's 193 member states agreed last May to try to curb binge drinking and other growing forms of excessive alcohol use through higher taxes on alcoholic drinks and tighter marketing restrictions.
DISEASE AND INJURY
Alcohol is a causal factor in 60 types of diseases and injuries, according to WHO's first report on alcohol since 2004.
Its consumption has been linked to cirrhosis of the liver, epilepsy, poisonings, road traffic accidents, violence, and several types of cancer, including cancers of the colorectum, breast, larynx and liver.
"Six or seven years ago we didn't have strong evidence of a causal relationship between drinking and breast cancer. Now we do," Vladimir Poznyak, head of WHO's substance abuse unit who coordinated the report, told Reuters.
Alcohol consumption rates vary greatly, from high levels in developed countries, to the lowest in North Africa, sub-Saharan Africa, and southern Asia, whose large Muslim populations often abstain from drinking.
Homemade or illegally produced alcohol -- falling outside governmental controls and tax nets -- accounts for nearly 30 percent of total worldwide adult consumption. Some is toxic.
In France and other European countries with high levels of adult per capita consumption, heavy episodic drinking is rather low, suggesting more regular but moderate drinking patterns.
Posted by DeltaJoy at 5:07 PM