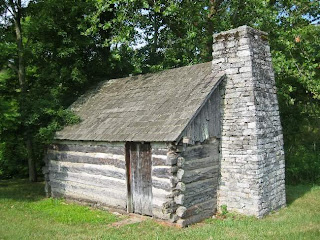 I've been stuck inside for two weeks now and starting to get a serious case of  cabin fever.  So  I decided to go looking for a nice Kentucky cabin to go along with the theme.
I was doing some reading on the Kentucky Historical Society's website I came across this picture of Daniel Boone's cabin and a reference to his son Daniel Morgan Boone.

Why I found that interesting is because of my own family Kentucky roots and the fact that one of my great uncle was named Daniel Morgan May.  It could  have been a popular name in those days and there were probably lots of little Danny Morgans running around. I think the name was likely linked to a state governor or war hero.
Mays Lick and Tollesboro were in the area that my family lived and some of the history is interesting.
As a child I actually ran around wearing a Coonskin cap which was no doubt the product of marketing the ever popular shoot-em-up cowboy movies of the day and long before I was aware of my Kentucky familial. One of life's funny little quirks.

Mays Lick, Mason County, has been a rural farming community for over two hundred years. Before the automobile, it was a bustling town with many merchants. Most of the residents can trace their ancestry back to the mid-1800s, and some to the late 1700s. Over the years, they have retained their way of life with few modifications. The first consolidated school in Kentucky was founded in Mays Lick, which also had Kentucky's first school transportation, consisting of a horse and wagon. Residents discuss the history of their families and the town, education, business, farming (including tobacco), hog killing, transportation, medicine, religion, funeral practices, recreation, and social life.

Daniel Boone's cabin now stands on private property on Highway 68, three miles from the  traffic island on Highways 68 and 36.  He or his son Daniel Morgan Boone built this cabin in 1795 on Brushey Creek and lived there until they moved to Missouri in 1799. The site, Boone's last home in Kentucky, is now on Forest Retreat Farm.