A lifetime distilled down into three little boxes otherwise known as "Rest and Residue"... the stuff that you did not specifically bequeath to someone in your will.
That is what arrived at my door this evening.

Last week a very dear friend of mine passed away at 93 years of age.  I first met her the year I was married, she lived on the second floor and we on the third.  We also met her husband who was bald as the proverbial billiard ball.  Very much like my cousin's husband and when she sent me a wedding picture of their son and his new wife there was no need for a DNA test that's for sure..  But I digress.  Now... fast forward a few decades......(can I digress and fast forward in the same paragraph?) .... still fast forwarding...and my goodness if we didn't up in the same circle of friends.
Yesterday one of those friends phoned me and being the executrix invited me to a little get-together tomorrow to pick out a keepsake of sweet Dorothy.  Because I was not going to be able to go I suggested she take a picture and send it to me so I could have a look and not miss out on the event.  She phoned later and said things were a little behind but would I actually like to see them if she brought them over?  I said sure but it really wasn't necessary to bother lugging stuff over here but it was a darned nice idea at any rate!!  So her husband and her brought over three small light boxes.  It was so sad really to see and touch the little treasure reminders of one now gone.  Ninety three years of life in three small boxes.  It's really true then the saying "You can't take it with you"; she didn't and I won't and you won't.
The real 'rest and residue' that Dorothy left behind couldn't be contained in anything tangible and will never fade nor will it be forgotten in three boxes or even in 300 boxes.  She was a wonderfully gifted person and once you met her you would never forget her.  She had beautiful spiritual outlook and a great life wisdom that translated into genuine loving care for others.
You were always made to feel welcome and she was sincerely elated whenever you came calling no matter how long since or how recent you were there.  She took such an interest in her friends young and old, that it seemed like she was with them every day and not confined in a nursing home.  She had a wonderful sense of humour and heartily laughed often.  Certain ones read to her on a regular basis from various books and magazines but she also got along quite well on her own by using a strong magnifying glass to read her Bible and write in her daily journal.  She never complained.  Friends once took her to to see an oil rig which she talked for months and had pictures of.  Brides would come on their wedding day, then they'd bring their babies and children which always thrilled Dorothy and from then on being included and involved in their lives;  she was once taken to see how someone's new home construction was progressing; to her place of worship to see the results of recent renovations firsthand.  Her bulletin board was always full of recent pictures of events as life happened.
And thus it continued on even into her early 90's.  If you were to visit her at coffee time she always had a cookie to share.  I never heard her once complain about the food, the staff or being lonely and after the visit it was always YOU that came away happier and truly inspired.  She was the one who could barely see, the one unable to hear without hearing aids, restricted to a wheelchair but you were the one most uplifted, encouraged and benefited by the experience.
She was a gift and she has left a large hole in our lives.
How many boxes will we leave behind when we go? More importantly how many  lives will we have truly touched like Dorothy did? 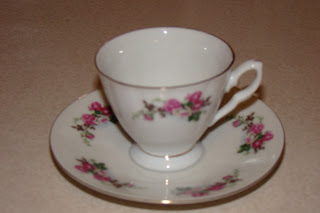