A HOLE IN ONE----AIRPLANE STYLE 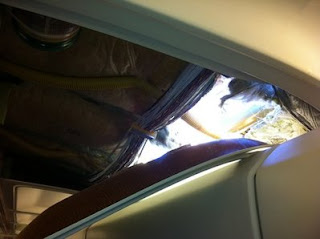 QUOTE OF THE DAY
"It was surreal, when you're riding in a modern aircraft you're used to being enclosed and not having the window rolled down," he said.

(CNN) -- A Southwest Airlines flight landed safely at a military base in Yuma, Arizona, on Friday with what passengers described as a 3-foot hole in the fuselage of the Boeing 737.
"I heard a loud popping sound about three or four minutes before it blew open on us," passenger Greg Hansen told CNN.
"(Then) a big explosion happened. A big noise, and from there, you felt some of the air being sucked out. It happened right behind me, in the row behind me and it covers about two and a half rows," he said from seat 11C.
Hansen, 41, a regional sales manager for a biotech company, was flying home to Sacramento from a business trip. Some people panicked and screamed as the blue sky and sun began to shine through the cabin in mid-flight, he said.
"Most people were just white knuckles holding onto the arm rests. The pilots did a great job and were under control to get us to a manageable level," he said.
But just behind him, Hansen says he could see the jagged edge of the aircraft where the rivets used to be.
"You can see the insulation and wiring. The interior ceiling panel was bouncing up and down with the air," he said.
"It was surreal, when you're riding in a modern aircraft. You're used to being enclosed and not having the window rolled down," he said.
Hansen described the hole as being about 3 or 4 feet long and about a foot wide.
Hansen said that he and the rest of the passengers were still on board Southwest Flight 812, after making an emergency landing at Yuma Marine Corps Air Station/International Airport at 7:07 p.m. ET.
The FAA said the captain made a rapid controlled descent from 36,000 to about 11,000 feet after the cabin lost pressure. Investigators are en route to the base, the FAA said.
"We do not know the cause of the decompression," said Ian Gregor of the FAA.
Southwest said in a statement that the flight crew "discovered a hole in the top of the aircraft."
A new aircraft is en route to the base with maintenance, ground crew and customer service agents "to assess the damaged aircraft and support the 118 customers aboard."
Hansen said the incident took place about 35 minutes into the flight. He says that it took about 45 seconds or a minute before the oxygen masks came down after the hole blew open.
"The crew was pretty calm about it. They walked around and checked on everyone," he said. "But it wasn't like the movies where papers get sucked out of the hole, but you could feel it and hear the noise."
Hansen said that most of the passengers were complaining of a pain in their eardrums from a rapid descent.
Southwest Airlines said only one injury is being reported.
"There are no reported customer injuries," reads a statement released by the airline. "One of the flight attendants, however, received a minor injury upon descent
Posted by DeltaJoy at 12:57 PM No comments: 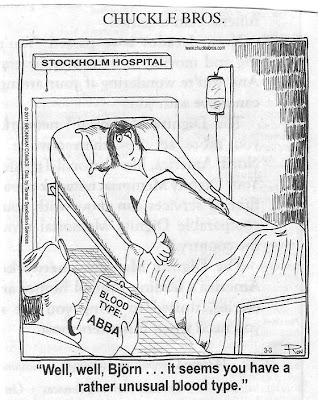 Posted by DeltaJoy at 5:37 PM No comments:

Have you ever even seen  a disaster movie that comes close to this scenario?

"There also are concerns about the disposal of bodies, because Japanese tend to cremate their dead, and fires can spread radiation. The Health Ministry recommends that the bodies be cleaned and those with even small levels of radiation should be handled only by people wearing suits, gloves and masks."

As if Japan needs another twist in this horror story.  If thousands of bodies have to be recovered in this manner because they are virtually glowing how long can we estimate that this might take?  Far too long from a decent, respectful viewpoint.  They might have to rethink the 'tendency' to cremate at this point.

It begs the thought though, where do you bury a massive number of people that are contaminated with radiation?  This nightmare is far from over.


Radiation slows recovery of dead near Japan plant - Yahoo! News: "Efforts to recover the bodies from the 12-mile (20-kilometer) evacuation zone around the Fukushima Dai-ichi plant have been slowed by a wasteland of debris, but also by fears of radiation. Police in that prefecture dressed in full radiation suits retrieved 19 corpses from the rubble Wednesday, the police official said. Authorities declined to say how many bodies might still be buried in the evacuation zone, but local media have estimated hundreds remain. Each officer wears a radiation detector and must leave the area whenever an alarm goes off — a frequent occurrence that has often dragged the operation to a halt, the official said. 'We want to recover bodies quickly, but also must ensure the safety of police officers against nuclear radiation,' he said. Officers were forced to give up trying to recover one corpse Sunday after radiation on it triggered the alarm. There also are concerns about the disposal of bodies, because Japanese tend to cremate their dead, and fires can spread radiation. The Health Ministry recommends that the bodies be cleaned and those with even small levels of radiation should be handled only by people wearing suits, gloves and masks. Overall, including in regions further from the stricken plant, police have recovered more than 11,000 bodies, but estimate that at least 19,500 are dead."
Posted by DeltaJoy at 6:39 AM No comments:

Posted by DeltaJoy at 8:46 PM No comments:

HERE'S A BIT OF FUN ON A COLD DREARY SNOWY DAY

Twins on roller skates singing and playing accordians.
Posted by DeltaJoy at 12:12 PM No comments: 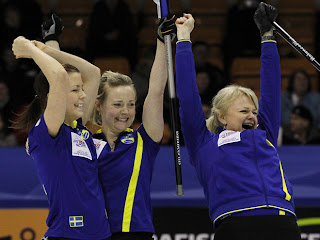 Anette Norberg's Rink Steals The Show
It would seem that this story is being buried like a curling rock. If you were looking for the story yesterday or today the news of it is as scarce as the old adage says ' hen's teeth'!
At the very least a' Bravo' and 'Jolly Good Show' for Amber and her crew should have beeen splashed all over every newspaper in the land. I managed to finally dig this up in the Toronto Sun and the picture in the National Post. It's amazing how fast fans cool off in the face of defeat.  The media whips up the fan base to a frenzy and then if they don't produce they aren't even worth yesterday's headline.
It was a good and enjoyable ride Amber!

Canada's Holland loses to Swedes Curling Sports Toronto Sun
Posted by DeltaJoy at 7:22 AM No comments:

THE READING WAS A MISTAKE??? WHO IS GOING TO BELIEVE THAT?

TOKYO – Emergency workers struggling to pump contaminated water from Japan's stricken nuclear complex fled from one of the troubled reactors Sunday after reporting a huge increase in radioactivity — a spike that officials later apologetically said was inaccurate.
The apology came after employees fled the complexes Unit 2 reactor when a reading showed radiation levels had reached 10 million times higher than normal in the reactor's cooling system. Officials said they were so high that the worker taking the measurements had withdrawn before taking a second reading.

Posted by DeltaJoy at 2:24 PM No comments: