Genealogy﻿ begins as an interest,
Becomes a hobby,
Continues as an avocation,
Takes over as an obsession,
And in its last stages,
Is an incurable disease.
That is my favorite expression about genealogy and describes exactly what happens when one embarks on this journey.
The first thing one learns is how to spell the word genealogy and the next thing is to learn is that there are Laws of Genealogy and here are a few:
Some good one-liners:
My ancestors must be in a Witness Protection Plan.
How can ONE ancestor cause so much trouble?
Genealogist are Time Unravelers.
A Pack Rat is hard to live with, but makes a Fine Ancestor.
Only a Genealogist regards a step backwards as Progress.
It is an unusual family that hath neither a Lady of the Evening or a Thief.
Many a Family Tree needs pruning.
SHH!  Be very, very quiet, I'm hunting forebears.
Genealogist live life in the Past Lane.
Genealogy--chasing your own tale!
Genealogy is not fatal--but it is a grave disease.
Old Genealogists never die--they just lose their census.
﻿
﻿
Posted by DeltaJoy at 7:05 PM No comments:

PUPPY OF THE MONTH 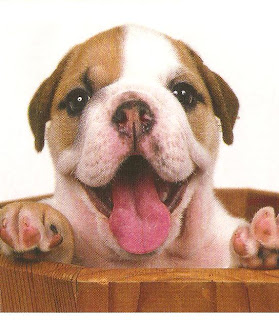 This is the face of January and a mighty fine one too I must say!   Although the month is half over it's never to late to start something so I will be posting a puppy every month.
My day did not start off particularly well as one of my neighbors decided to take my laundry day and so I didn't get finished as early as I usually do.  Thus with my day shortened and a tea party looming in the afternoon I was a mite cranky but I got over it.
The tea party was lovely, hosted by a lovely lady in a gorgeous house that she is house-sitting for the winter.  She says it's like a holiday for her and her husband rattling around in it all by themselves.  She says they don't use any of the rooms with white rugs.  Egad, can you imagine living in a house with the formal DR and front parlour/sitting room with rugs the color of eggshell?  I wouldn't use them either even if I lived there and definitely no pets and no children!!
That is quite the contrast to the living conditions of a family I read about recently.  The economy south of a certain border has made life very hard for some.  A young man and his little boy recently moved back to his parent's home where his sister and HER family had already returned to.  The father spent 45 minutes on the phone with a very confused enumerator to get the census form filled out correctly.
The final tally:  six adults, one teenager, one toddler, two dogs, a cat, a hamster and a bearded dragon that has recently moved out.
Posted by DeltaJoy at 8:41 PM No comments: 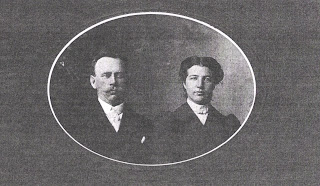 ﻿
﻿
These are my maternal grandparents.  I've been trying to date this picture for sometime and decided to go with that it's likely an anniversary.    I think it might be their 20th on January 26th 1929.   Grampa would have be 53 in this picture and grandma would be 38.  They had 8 living children.  She died May 17th 1938 of a cancerous tumour on her neck at the 48 years, 10 months and 13 days. I'm not really good at dating pictures and it is just a guess.
One of Ed's ancestors, Jesse Sage, died with a neck tumour, Alice had a neck tumour, one of Ed and Alice's son died from Hodgkin's Lymphoma and a member of mom's family has Non-Hodgkins Lymphoma with involvement in most of the usual lymphatic areas including the neck. 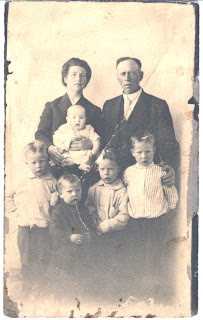 This is the little family in 1915.  Uncle Leo the oldest, under his dad's hand and the youngest Walter were two of the three boys who fought at the front in WWII.  The next and last son to be born was Ken﻿ in 1917 and he is still over there buried at Nijmegen, Netherlands.  Then the last were two girls, my mother and her sister who was born 7 years later and today is the only remaining member of the family.  Walter was the one who had Hodkin's and the little pudgy face in the front was Cecil who lost a leg to a train and then eventually was killed by one.  So my dear grandparents certainly had a lot of grief in their family and my great aunt even writes their hard life in various letters when they moved to Saskatchewan for a time from Alberta shortly after 1915.
Times were tough in those days, really tough, not conditions that we will ever see I hope.
Posted by DeltaJoy at 8:05 PM No comments:

Scientists unwittingly continue to prove that faith-based knowledge is superior to philosophical theories again and again.

From Medical News today the following:

Babies, even those too young to talk, can understand many of the words that adults are saying - and their brains process them in a grown-up way.

Combining the cutting-edge technologies of MRI and MEG, scientists at the University of California, San Diego show that babies just over a year old process words they hear with the same brain structures as adults, and in the same amount of time. Moreover, the researchers found that babies were not merely processing the words as sounds, but were capable of grasping their meaning.

This study was jointly led by Eric Halgren, PhD, professor of radiology in the School of Medicine, Jeff Elman, PhD, professor of cognitive science in the Division of Social Sciences, and first author, Katherine E. Travis, of the Department of Neurosciences and the Multimodal Imaging Laboratory, all at UC San Diego. The work is published this week in the Oxford University Press journal Cerebral Cortex.

"Babies are using the same brain mechanisms as adults to access the meaning of words from what is thought to be a mental 'database' of meanings, a database which is continually being updated right into adulthood," said Travis.


Previously, many people thought infants might use an entirely different mechanism for learning words, and that learning began primitively and evolved into the process used by adults. Determining the areas of the brain responsible for learning language, however, has been hampered by a lack of evidence showing where language is processed in the developing brain.

While lesions in two areas called Broca's and Wernicke's (frontotemporal) areas have long been known to be associated with loss of language skills in adults, such lesions in early childhood have little impact on language development. To explain this discordance, some have proposed that the right hemisphere and inferior frontal regions are initially critical for language, and that classical language areas of adulthood become dominant only with increasing linguistic experience. Alternatively, other theories have suggested that the plasticity of an infant's brain allows other regions to take over language-learning tasks if left frontotemporal regions are damaged at an early age.
Posted by DeltaJoy at 6:38 PM No comments:

MY Next Tech Purchase....A Book Scanner

Cumberland, R.I. (Jan. 6, 2010) – ION (www.ionaudio.com), a leading manufacturer of consumer electronics and entertainment technology, announces the Book Saver Book Scanner, the perfect way to convert your printed materials to digital files for use with e-readers and for digital archiving. ION will exhibit Book Saver at the 2011 International Consumer Electronics Show (CES), booth #12638, in Las Vegas, Nevada from January 6 – 9.

With the growing popularity of e-readers and digital books, ION has created the fastest and most convenient system for transferring novels, textbooks and periodicals to the digital realm. Book Saver allows everyone to easily transfer their favorite stories directly to convenient SD cards. Once converted, the books can be quickly transferred to a computer or e-reader.

Book Saver has two cameras that take separate images in rapid succession of each page within an open book. Both cameras of Book Saver also have a flash for allowing the page to be fully illuminated during the scanning process. Book Saver’s cradle, where the book is placed during the scanning process, is also angled as to not require the user to hold pages down to get a flat, even surface. Furthermore, while similar devices require up to seven seconds per one page, Book Saver takes only one second per two pages!"
Posted by DeltaJoy at 1:14 PM No comments:

Dr. Alfred Bonati Comments On Study That Reveals Traditional Open Back Surgery Fails 74% Of The Time

This is a very interesting study and something to think about if you or someone you know is contemplating back surgery.

Dr. Alfred Bonati Comments On Study That Reveals Traditional Open Back Surgery Fails 74% Of The Time
Posted by DeltaJoy at 7:18 PM No comments: