Despite my prolonged absence I notice there have still been activity on a daily basis.  I hope to be much more visible and vocal to reward you...... since I can't for the life of me figure out how to send you all a turkey :)
Posted by DeltaJoy at 11:41 AM No comments:


I have made a minor adjustment to try and resolve some difficulties in commenting on my posts. Thanks for your patience and will report this if necessary.
🙋
Posted by DeltaJoy at 11:18 AM No comments:


Once used without a second thought it is now treated much differently. Many progressive doctors even refuse to use blood because they found their patients actually got better faster without blood. Blood is a dangerous and unnecessary drug when there are many safe and effective blood volume expanders and drugs like EPO.
The above opinion is my own and unrelated to the following article.
Deltajoy


Heart attack patients who receive a blood transfusion are at a much higher risk of death than those who don't receive one, according to a report published in Archives of Internal Medicine...

To read the full article, please go to:
http://www.medicalnewstoday.com/articles/254483.php

The Back Alley Picture of the Day 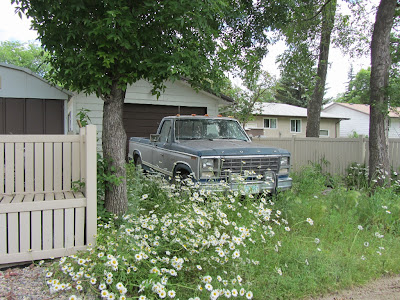 For some reason I find back alleys more interesting and fun to photograph than front yards.  You just never know what you will find.  I really like the photographic versatility of the daisy as it seems to lend a certain softness and many times contrast in a picture.
I am still considering whether to allow my photos to be copied or not and would like some feed back on that.
﻿
﻿
﻿


You can view my original post with picture January 27, 2011 here on Blogspot.
I can't upload the picture from my Camera Roll to Ipad for some reason but I've posted it on Facebook.


This 1947 picture from Minnesota, U.S.A. is like a picture I belonged to my parents but now cannot not find. My pleas on Facebook have so far have yielded no results and neither has extensive internet searches. Surely I didn't have the ONLY Canadian image of the train buried in between snow drifts higher than the telephone lines?

Extreme Weather in Canada - The Canadian Encyclopedia: "The worst blizzard in Canadian railway history occurred between January 30 and February 8, 1947, when 10 days of blowing snow buried towns and trains from Calgary to Winnipeg. Some Saskatchewan roads and rail lines remained impassable until spring. Children stepped over power lines on their way to school and people dug tunnels to their outhouses."

We have a ways to go this year before there is any comparison to 1947. However worry lines are already beginning to appear across the brows of many a civic leader on the prairies well before spring. The idea is that being proactive is the smarter thing to do rather than mop up the consequences of being ill prepared. "Be prepared to fill sandbags" said one report, and another spoke of the monies that are now being earmarked in January for berms and levies.

Time will tell of course just how effective and 'proactive' humans really can be given that the powers of nature can never be predicted.

Posted by DeltaJoy at 8:15 PM No comments:

One of the first things I want to do is change my header name to Deltajoy's blogs but for the  meantime I will leave SHE SAID  in front of it.  There are numerous sites named SHE SAID and I can't even find myself sometimes.  So after a reasonable time I will delete the first two words and site will be known as Deltajoy's blogs.

Posted by DeltaJoy at 3:40 PM No comments:

I have no real good excuse for being delinquent for so long other than serious health issues.  I may have lost my one and only follower by now I'm sure.
So much has happened in the last year that I'm not about to try and play catch-up but just begin after I learn some things about the changes made in this web site. I also need to get some pictures available to upload, yes I've been able to get a few pictures and will even if I have to crawl to get them....
Be seeing you soon🙋
Posted by DeltaJoy at 10:52 AM No comments: