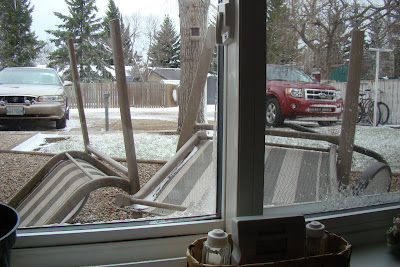 ﻿
The rain started late in the afternoon yesterday and it got colder and colder until the rain became snow and it was a white out all night and most of the morning with 60-80K winds. It was a wild, wet and windy night and this is what greeted me outside my kitchen this morning.  There was ice and snow covering the windows and could hardly see out first thing today. Travel was not advised in this area.
The lawn chairs could easily have been IN my kitchen if anyone of those pointy legs turned this way!  I barely slept as the winds howled so much it didn't matter which room I tried to sleep in.  I tried leaving a radio on, earplugs and even a pill but nothing worked.  The power went on and off a number of times causing all sorts of computer beeps and flashing lights which didn't help any either.   It's 2 PM now and and I dare say the winds are still about 50k and talk about cabin fever...I just wish I was deaf today I'm sure I'll hear that wind tonight even if there is none!.  I couldn't very well bake anything or wash clothes because I'd be in a fix if the power went out so I feel I really wasted a day.  I think I will vacuum the living room and do some dusting so I can at least feel somewhat productive today.  I have reading to catch up on and I'd better do it in the daylight as well.
Posted by DeltaJoy at 2:06 PM No comments: 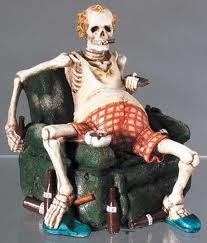 Despite the the dire forecast and present statistics the answers are not popular socially nor politically.  People do not like anyone, especially governments, telling them how to live their lives even if those lives very likely will be shortened lives because they won't change the habits that are harming them.
WHO reports:
"The rise of chronic noncommunicable diseases presents an enormous challenge," says WHO Director-General Dr Margaret Chan, who launched the report during the WHO Global Forum on addressing the challenge of noncommunicable diseases, being held today in Moscow, the Russian Federation. "For some countries, it is no exaggeration to describe the situation as an impending disaster; a disaster for health, for society, and most of all for national economies."

Dr Chan adds: "Chronic noncommunicable diseases deliver a two-punch blow to development. They cause billions of dollars in losses of national income, and they push millions of people below the poverty line, each and every year."

But millions of deaths can be prevented by stronger implementation of measures that exist today. These include policies that promote government-wide action against NCDs: stronger anti-tobacco controls and promoting healthier diets, physical activity, and reducing harmful use of alcohol; along with improving people's access to essential health care.
The Global status report on NCDs provides global, regional and country-specific statistics, evidence, and experiences needed to launch a more forceful response to the growing threat posed by chronic noncommunicable diseases. It provides a baseline to chart future NCD trends and responses in countries, including in terms of its socioeconomic impacts. The report provides advice and recommendations for all countries and pays special attention to conditions in low- and middle-income countries which are hardest hit by NCDs.
Cardiovascular diseases account for most NCD deaths, or 17 million people annually, followed by cancer (7.6 million), respiratory disease (4.2 million), and diabetes (1.3 million). These four groups of diseases account for around 80% of all NCD deaths, and share four common risk factors:

- tobacco use
- physical inactivity
- the harmful use of alcohol and
- poor diets.

Not just a problem of affluent societies

"About 30% of people dying from NCDs in low- and middle-income countries are aged under 60 years and are in their most productive period of life. These premature deaths are all the more tragic because they are largely preventable," says Dr Ala Alwan, WHO Assistant Director-General for Noncommunicable Diseases and Mental Health. "This is a great loss, not just at an individual level, but also profoundly affect the family and a country's workforce. For the millions struggling with poverty, a vicious circle ensues. Poverty contributes to NCDs and NCDs contribute to poverty. Unless the epidemic of NCDs is aggressively confronted, the global goal of reducing poverty will be difficult to achieve."
Posted by DeltaJoy at 9:32 PM No comments:

Email ThisBlogThis!Share to TwitterShare to FacebookShare to Pinterest
Labels: WHO-- NCDs RISING

.....so said Donald T-rump today nearly breaking his own arm while patting himself on the back.
Another quote but much worthier was said by wise King Solomon, "Pride is before a crash and a haughty spirit before stumbling." 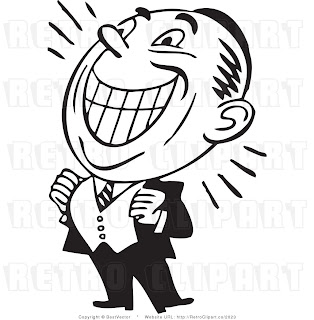 Email ThisBlogThis!Share to TwitterShare to FacebookShare to Pinterest
Labels: Quotes 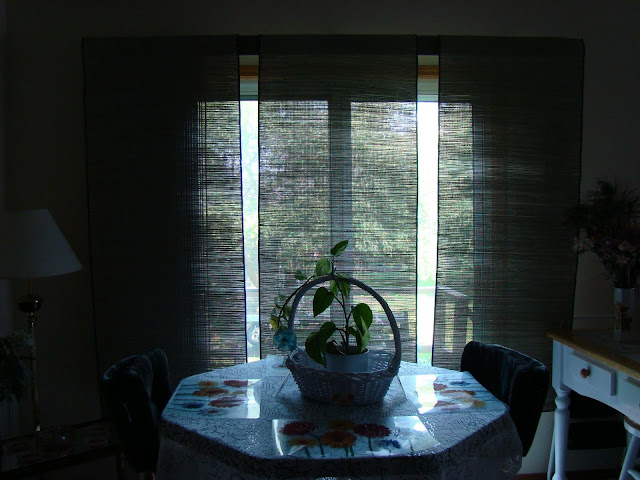 I took this picture one hot summer day after I hung some bamboo mats to try and keep the sun out in the mornings.  I rather liked the look.
Posted by DeltaJoy at 8:14 PM No comments: 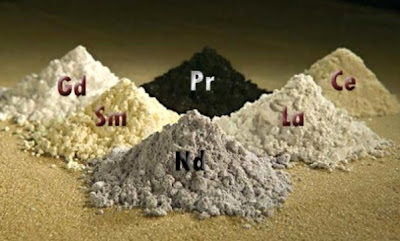 Many investors have dramatically expanded their vocabulary over the past few months.
On a smoke break or huddled around the water cooler they’re throwing out words like “ytterbium” and “neodymium” as if holding PhDs in geology, and they even seem know what they’re talking about.
That’s what happens when China decides to restrict the world’s supply of rare-earth metals, which are comprised of 17 elements used in everything from smart phones and big-screen TVs to wind turbines and electric cars.
It wouldn’t be so bad if China didn’t control more than 95 per cent of the market, but because it does a number of rare-earth metal stocks based in Canada, the United States and Australia have been on a wild ride.
Some, such as Molycorp, Rare Element Resources and Hudson Resources, have more than tripled in value over the past five months as investors anticipate the future riches expected to come from filling the Chinese vacuum.
As defined by IUPAC, rare earth elements or rare earth metals are a set of seventeen chemical elements in the periodic table specifically the fifteen lanthanoids plus scalanthanoids , scandium and yttrium.  Scandium and yttrium are considered rare earth elements since they tend to occur in the same ore deposits as the lanthanoids and exhibit similar chemical properties.
Despite their name, rare earth elements (with the exception of the radioactive promethium) are relatively plentiful in the earth’s crust with cerium being the 25th most abundant element at 68 parts per million (similar to copper). However, because of their geochemical properties rare earth elements are typically dispersed and not often found in concentrated and economically exploitable forms known as rare earth metals.  It was the very scarcity of these minerals (previously called "earths") that led to the term "rare earth". The first such mineral discovered was gadolinite, a compound of cerium, yttrium, iron, silicon, and other elements. This mineral was extracted from a mine in the village of Ytterby in Sweden; many of the rare earth elements bear names derived from this location.

China has officially cited environmental issues as one of the key factors for its recent regulation on the industry, but non-environmental motives have also been imputed to China's rare earth policy.  According to The Economist, "Slashing their exports of rare-earth metals...is all about moving Chinese manufacturers up the supply chain, so they can sell valuable finished goods to the world rather than lowly raw materials. One possible example is the division of General Motors which deals with miniaturized magnet research, which shut down its US office and moved its entire staff to China in 2006.
Posted by DeltaJoy at 3:45 PM No comments: 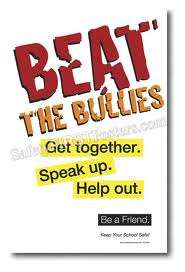 Here's a theory put forth by a study done in Massachusetts, USA which really makes sense when one thinks about it.  Behavior is learned for one thing, and many times serious 'acting out' behaviours are a reflection of something going on in the child or adolescent's life.  For some stats follow the link.
http://www.medicalnewstoday.com/articles/223219.php

Bullying At School Linked To Violence At Home

violence at home, a new report issued by the CDC (Centers for

Disease Control and Prevention) and prepared together with the

Massachusetts Department of Public Health has found. The researchers

found that among middle and high school pupils across the state,

encounters of family violence were more common among young people

who had both taken part in bullying and been victims of it.

The CDC's Morbidity and Mortality Weekly Report (MMWR) report explains that a growing body of evidence has been linking family violence with bullying. The authors write that they gathered and analyzed data from the Massachusetts Youth Health Survey (2009), an anonymous, paper and pencil survey carried out every 24 months.

There are considerable differences in risk factors contributing to individuals involved in varying categories of bullying, compared to those

who have never been active bullies or victims of it.
Posted by DeltaJoy at 4:21 PM No comments: