In the six months since Japan was hit by the triple disaster of an earthquake, tsunami and nuclear meltdown, the Asian nation has been forced to confront an amorphous crisis that has unfolded on several fronts.
Cleaning up from the tsunami and powerful quake have been herculean tasks in their own right, but the densely populated Pacific nation is also dealing with the world's worst nuclear disaster since Chernobyl, which sent shock waves through Europe in 1986.
While there have been lingering economic and political aftershocks six months after the disaster in Japan, the ecological effects could last for decades, especially on the nation's east coast.
To put the disaster in perspective, the amount of cancer-causing cesium leaked from the destroyed Fukushima plant is equal to about 15,000 terabecquerels: an amount 168 times larger than the cesium released from the atomic bomb attack on Hiroshima in 1945.
Though radiation at Fukushima is now being trapped through clean-up efforts, some 100,000 residents still haven't returned to their homes, and officials say it could be years before they can return.
In fact, it could be decades before they are allowed home, as recent reports have suggested that the ruined reactor cores are still too hot to be handled and removed safely.
"We cannot deny a possibility that some of the residents may not be able to return their homes for a long time in some areas despite our decontamination efforts," Chief Cabinet Secretary Yukio Edano said at a recent news conference.
"We are very sorry."
With the apologies, however, there is some progress.
Around 3,000 workers are on the disaster site each day, cleaning up debris that remains. Workers have also installed filtration systems that decontaminate radioactive water and pump it back into the core to cool the reactors.
Posted by DeltaJoy at 7:34 PM No comments:

THERE GOES THE NEIGHBORHOOD 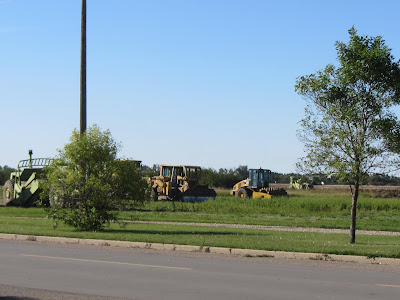 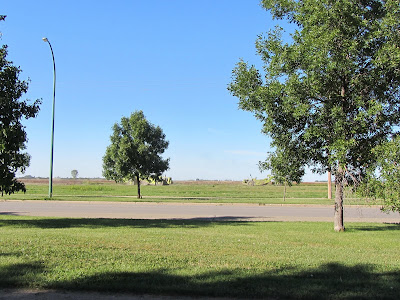 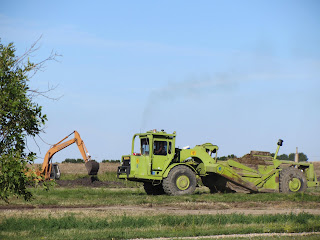 This is the scene of change one half block north of me.  A new housing development is going up at the end of the only street that directly accesses the rest of the city.  I can just imagine the traffic and noise for the next 3 or 4 years.  I cherished very much the open expanse  and solitude as I walk for blocks along side it or when I just looked down the street.  I will miss the beautiful melody of the meadow larks every spring and the croaking of frogs that rang out loudly while there was yet a chill in the evening air.  The little pond they use to live in was drained down the sewer in the last for days.
Now there is dust and the continual noise of these machines that used to be called Euclids just a few years ago.  When I talked with my son the other day I mentioned the word 'Euclid' and when he said "Huh" I knew something must have happened to the company that had dominated construction industry for many decades.
I had chosen this week for a bit of a get-a-way which regrettably didn't happen.  A great pity because last evening the owner of the duplex next door began ripping off the shingles followed by be a lot more noise thorough out the weekend as they apply shingles.  *SIGH*
I found some information that may be of interest to those who remember the big green machne.

The Euclid Company of Ohio was a company specialized in heavy plant for earthmoving, namely dump trucks and Motor-scrapers, that operated from the United States of America from the 1920s to the 1950s, then it was purchased by General Motors and became a division of them. Later on sold to Hitachi, Ltd of Japan. Now Euclid is a section of Volvo.
In 1959 the Department of Justice under Attorney General William P. Rogers initiated an anti-trust suit, under the Clayton Act, against General Motors Corporation. It charged that GM was too dominant, and its business methods stifled competition in the off-road hauler and earthmoving market. GM fought the suit for 8 years, finally surrendering in 1968, agreeing to sell the Euclid Division.  A line produced by Gm were sold as Terex, but were essentially the same as the Euclid line.
Euclid was never the same and never achieved the prominence that it once enjoyed before its acquisition by GM. In the 1950s when you mentioned off road dump trucks, they were referred to as "Euc's", just like we say Kleenex today for tissue.
Another type of machine that Euclid pioneered was the belly dump. This machine combined an off road tractor, with a fifth wheel, and a very large,(at that time) up to 100-ton capacity, belly dump trailer. These and their off road end dump brothers were normally loaded by cable operated, crawler shovels of other manufacturers.
Euclid also manufactured wheeled tractor scrapers, such as were invented by R. G. LeTourneau (later Westinghouse Air Brake) and now almost singularly manufactured by Caterpillar. Euclid's scrapers were powered by the same tractors as their belly dumps. Interestingly, Euclid was the first major manufacturer to commercialize the now ubiquitous articulated rubber tired loader; the mainstay of most heavy equipment manufacturers, particularly Caterpillar.
Production was moved from Cleveland, Ohio to Guelph in Ontario, Canada and carries on. The trucks are very modern and even come equipped with mufflers and computer controllers and have to meet environmental requirements for sound and exhaust emissions.
White sold Euclid, Inc. to Daimler Benz AG of Stuttgart, Germany in August, 1977, and in January 1984, Daimler-Benz sold Euclid to one of Euclid’s former competitors, Clark Equipment Company, and it became part of the Clark-Michigan Company, as Clark’s construction machinery division was then called. The following April, Clark formed a 50/50 joint venture with Sweden’s Volvo AB to manufacture Volvo, Michigan and Euclid construction equipment under the name of VME Group NV.
VME underwent several rather confusing divisions amongst its American and European operations, culminating in 1991 in the creation of a VME North Americas unit to handle only the Euclid lines. venture until it owned 100% of the venture in 2000. Euclid Hitachi became Hitachi Construction Truck Manufacturing on January 1, 2004, and the famous Euclid green was replaced with Hitachi orange.
The Euclid trade name and model nomenclature were gradually phased out by the end of the year, ending 80 years of the Euclid name appearing on construction machinery.
Posted by DeltaJoy at 3:26 PM No comments:

This was some city somewhere that I was reading about the other day, Fisher Island, USA, I think and pardon me but they must be very different people there..........

There were 138 households out of which 26.1% had children under the age of 18 living with them, 44.2% were married couples living together, 5.1% had a female householder with no husband present, and 43.5% were non-families. [Non-family households???? Hmmm]
34.8% of all households were made up of individuals [well hurray some households were actually made up of individuals!!! which begs the question "Just what were the non-households made up of???"]
and 10.1% had someone living alone who was 65 years of age or older. The average household size was 2.09 and the average family size was 2.72.

Does anyone really read that stuff after they print it?
Posted by DeltaJoy at 4:24 PM No comments:

BANGKOK (AP) — Thai authorities have arrested two men who tried to smuggle 120 dogs to Vietnam to be sold for human consumption, police said Tuesday.
Acting on a tip, local officials and police officers stopped two pickup trucks carrying the dogs stuffed into bags in Nakhon Phanom province in northern Thailand near Laos, police Lt. Col. Detchai Wannapruek said.
He said police arrested the two drivers, a 24-year-old Thai and 23-year-old Vietnamese, and they confessed. They face charges of illegally transporting animals, unlicensed trade of animals and cruelty to animals. They could also be charged with transporting unvaccinated animals.
"They were hired to drive the vehicles to the border, where the dogs would be sent off to Vietnam," Detchai said.
Police said 31 of the dogs were dead and the remaining 89 will be taken to a center that cares for rescued dogs in Nakhon Phanom, 370 miles (600 kilometers) northeast of Bangkok.
In mid-August, about 1,800 dogs were rescued from smugglers in Nakhon Phanom, police said.
Their rescue made national news and after learning of their sad state Thais donated more than 20 million baht ($667,000) to help the animals.
Thai media reported on Tuesday, however, that as many as half of those dogs had died at the center because they arrived in such poor health.
Dog meat is a delicacy in Vietnam and is served at restaurants in some parts of the country's north.
Posted by DeltaJoy at 8:27 AM 1 comment:

WILL WE ALL BE ROLLING IN THE DIRT SOON??

A strain of harmless bacteria that live in soil could soon be helping to kill cancer tumors, thanks to researchers from the University of Nottingham in the UK and the University of Maastricht in the Netherlands who are presenting their work at a conference in York, England, this week. They said they expect to test the strain in cancer patients in 2013, and if successful, hope the method can be combined with additional approaches to win the battle against cancer.

The bacterium is Clostridium sporogenes, which is widespread in soil. Injected into cancer patients, the bacterium grows in solid tumors and releases an enzyme which triggers a separately injected "pro-drug" to kill cancer cells.

The anti-cancer drug only becomes active when it meets the bacterial enzyme in the tumor and therfore only targets cells nearby.

To take the experimental therapy from the lab stage to be ready for clinical trials, the researchers had to carry out a number of improvements.

One improvement was to insert a gene into the bacterium's DNA that made it produce greater quantities of the trigger enzyme in the tumor. This also improved the enzyme's ability to convert the "pro-drug" into its active form.

But what is it about this bacterium that makes it especially suitable for cancer therapy? The clue lies in the question: how come healthy cells aren't affected? This is an important question for clinical trials: researchers have to show that their candidate therapy will leave healthy cells alone.

The leader of this research is Nigel Minton, Professor of Applied Molecular Microbiology at Nottingham, who set up the Clostridia Research Group (CRG) there in 2004. He explained to the press the reason Clostridium sporogenes makes a good candidate for this type of therapy is because it is an ancient organism that evolved on Earth before it had an oxygen-rich atmosphere, so it only thrives in environments low in oxygen:

"When Clostridia spores are injected into a cancer patient, they will only grow in oxygen-depleted environments, ie the centre of solid tumors. This is a totally natural phenomenon, which requires no fundamental alterations and is exquisitely specific. We can exploit this specificity to kill tumor cells but leave healthy tissue unscathed," said Minton.

The hope is that C. sporogenes will eventually prove to be a simple and safe way to cure a wide range of solid tumors.

Minton said their therapy will kill "all types of tumor cell". He said it was better than surgery, especially for patients at high risk or who have tumors that are difficult to reach.

"We anticipate that the strain we have developed will be used in a clinical trial in 2013 led by Jan Theys and Philippe Lambin at the University of Maastricht in The Netherlands," added Minton, who anticipates if the trial is successful, the therapy will become a frontline treatment for solid tumors.
Posted by DeltaJoy at 8:02 AM No comments:

Email ThisBlogThis!Share to TwitterShare to FacebookShare to Pinterest
Labels: DIRT FOR TUMORS 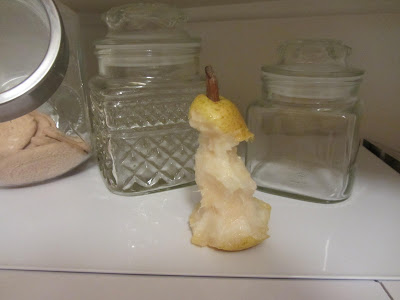 .......and it was very good.
Now I'm working on a watermelon which is alarmingly ripe and has to be used and soon.  So far I've fed three other people and myself and am now tackling the other half which resides in my refrigerator by digging it out at my pleasure.
Posted by DeltaJoy at 12:40 PM No comments: