The first sale of stock by a private company to the public. IPOs are often issued by smaller, younger companies seeking the capital to expand, but can also be done by large privately owned companies looking to become publicly traded.

My thoughts every time I hear of an Initial Public Offering is this--here is another company raising money with your money so that they can sell what ever product they have to you for more of your money.  Makes sense to me.
Here is a review in part of a recent new movie ...."a Nicolas Cage movie set during the late Crusades has the guts to lance one of the bigger boils on the face of organized religion...killing in the name of God."  I think that was well put.
Did you know that DTD, [not DDT] is the acronym for Developmental Topographical Disorientation?  It is a relatively obscure disorder with only one curious symptom---the otherwise normally functioning person cannot find their way to or from their home.  Cited was the experience of one such lady whose father had to walk her to work and back home every day for five years before the condition reverted back to normal.  What a dedicated parent!
The alarm function on my Blackberry is set to the music by Cher "If I Could Turn Back Time."
Posted by DeltaJoy at 4:51 PM No comments:

I read an interesting study about a new and low-tech method of diagnosing and differentiation of Parkinson's disease and ran across the word extranigral.  Now it's not surprising that there are medical terms one has never seen before but the surprise came when I turned to Wikipedia for a simple definition and for the first time it let me down!  I guess I'm not the only one left wondering what extranigral means.  I've highlighted the meaningful, understandable and as it turns out a very simple definition if you can get through the other words.

Wolters ECh. Non-motor extranigral signs and symptoms in Parkinson's disease. Parkinsonism Relat Disord 15 Suppl 3:S6 (2009): "Non-motor extranigral signs and symptoms in Parkinson's disease.
Erik Ch Wolters
Neuroscience Campus Amsterdam, Dept. of Neurology, VU University Medical Center, Amsterdam, The Netherlands.
Clinical symptoms in Parkinson's disease (PD) comprise both motor and non-motor symptoms. In this disease, synucleinopathic-induced, nigral dopamine deficiency-related dysfunction of the basal ganglia is held responsible for the characteristic levodopa-responsive motor signs and symptoms (bradykinesia, hypokinesia, rigidity), known as parkinsonism and essential for clinical diagnosis in PD, as well as subtle motivational and cognitive dysfunctions. Some motor symptoms, such as tremor and postural instability, and most non-motor symptoms, however, are not fully levodopa-responsive, and suggested to manifest extranigral pathology. These symptoms include autonomic, sleep, sensory and neuropsychiatric symptoms, which in some cases may precede the first signs of motor parkinsonism,"

THURSDAY, Jan. 6 (HealthDay News) -- The ability to ride a bicycle can determine whether a patient has atypical or "regular" Parkinson's disease, according to researchers in the Netherlands.
Dr. Bastiaan R. Bloem and colleagues used brain imaging and other tests to assess 45 patients with Parkinson's disease and 66 with atypical Parkinsonism. The patients were also asked if they could still ride a bicycle. Only two (4 percent) of those with regular Parkinson's said they could no longer ride, compared with 34 (52 percent) of those with atypical Parkinsonism.
The researchers found that asking patients if they could still ride a bike had better diagnostic value than the tests. This suggests that asking about bike-riding could save money and reduce the burden for patients, said the researchers at the Parkinson Center Nijmegen.
[Link provided for the entire article.]

Quite by accident a few weeks ago I found out that Nijmegen, Netherlands was the centre for Parkinson's disease research while I was doing some research of my own about my uncle Ken who died in WWII .  I was looking for the exact location where was buried and it turns out that it is close to Nijmegen, a city name I had never heard of before.
They do say that 'travel is broadening' and I guess it applies to virtual travel as well now days.
Posted by DeltaJoy at 7:25 PM No comments: 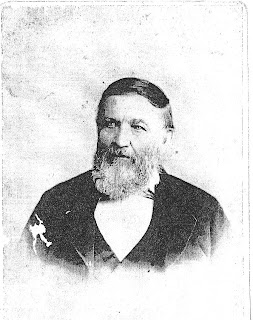 ﻿
Once upon a time Jesse Sage Sr and Ann Vowals were married October 15, 1797﻿, in Somerset, England.  Their 8th child Jesse Jr pictured above came to Canada to spy out the land.  He returned to England and brought out 6 brothers and 3 married sisters.  One those sisters was Ann Ash and her husband Charles Ash founding the Ash family in Canada and eventually becoming my maternal ancestors.
Three days ago I was contacted by a Sage cousin named Rob from England looking for information about his ancestors that came to Canada and thus many emails have travelled back forth across the Pond.  It's really exciting to be in touch with another member of the family and it never fails to thrill me as I think of what I might learn and see in the material he will send.  I am especially hopeful that I will get some cemetery pictures.
Jesse Sage Sr's tombstone reads as follows:
"The sweet remembrance of the just shall flourish when they sleep in dust."﻿
Posted by DeltaJoy at 9:59 PM No comments:

Reading To Newborns In The NICU

It's important to do everything possible to strenthen the bond between newborns and parents as soon as possible even in NICU.  The Canadian Nurses Association followed 120 families with very positive results as this study shows.
Posted by DeltaJoy at 6:54 PM No comments:

﻿
Just when you think you've heard everything along comes an article like the one I read recently by Jason Warick Saskatchewan News Network December 31, 2010......

Apparently our lovely northern city of Saskatoon suffered some labour problems last week and not of the maternal type awaiting the New Year's baby.  During the week between Christmas and the New Year, 1,800 homes and businesses went undelivered due to many employees on vacation, a flu bug and ongoing staff shortages.
"Even though wages for a new letter carrier start at more than $23 per hour, plus a benefits package, Saskatchewan's hot economy has made recruitment of new workers difficult", says  Canada Post spokeswoman Teresa Williams.

I can understand the flu but in my estimation vacation should not be a problem at any holiday time and if it is, it's not the worker's fault it is the fault of management and poor scheduling.
Saskatchewan's minimum wage is $9.25.  Who in their right mind would prefer to work for $9.25 instead of $23?.  Are Saskatchewan residents becoming 'wage snobs' now that prosperity has visited us for the first time ever?  Or is it just old fashioned greed rearing it's ugly head?
Posted by DeltaJoy at 2:59 PM No comments:

Orange In Your Stocking: Squeezing Out Maximum Health Benefits

Orange In Your Stocking: Squeezing Out Maximum Health Benefits

The popular stocking stuffer is known for its vitamin C and blood-protecting antioxidants, but researchers wanted to learn why a whole orange is better for you than its components when taken separately. The ultimate outcome of the research could be a super-supplement that captures the best health benefits of eating oranges and drinking orange juice.

"There's something about an orange that's better than taking a vitamin C capsule, and that's really what we're trying to figure out," said Tory Parker, BYU assistant professor of nutrition, dietetics and food science. "We think it's the particular mixture of antioxidants in an orange that makes it so good for you."

The team published the best health-promoting combinations of those natural antioxidants in a recent issue of the Journal of Food Science. The paper's lead author, Brenner Freeman, was a BYU undergrad when he conducted the research. Now applying to medical schools, Brenner chose to study oranges because he was raised on a citrus orchard in Arizona.

"I spent a lot of time hunched over a lab bench in the dark doing this research," Freeman said. "But what I learned was worth it, and having this publication definitely gives me an advantage on my med school applications."

Parker explained that every time we eat carbs and fat, we increase the amount of free radicals in our blood. Over time, that increases our chance for hardened arteries and heart disease. But eating fruit protects us from that effect for a few hours after every meal.

"Carbs and fat increase free radicals, and fruit and internal antioxidants counteract that," Parker said. "That means fruit should be your dessert - remember, before cookies, candy and other sugary snacks became so widespread, fruit was our 'sweet.'"

Parker noted supplement companies often mix "high concentrations of extracts from blueberry and blackberry and orange and throw them all together and hope it's good."

He wanted to avoid such assumptions by testing dozens of combinations of the antioxidants found in an orange at the same proportions they occur naturally.

"We're looking for synergistic effects," Parker said. "Cases where the effect of two or more antioxidants together was stronger than the sum of them separately."

In conclusion, they identified several combinations of antioxidants that were the most synergistic - the compounds hesperidin and naringenin, in particular, appeared to contribute the most punch in the combinations.
Posted by DeltaJoy at 2:36 PM No comments:

A Bunch of Stuff

THUMBS DOWN:  Happening now on CBC Television is around the clock  broadcasting of something called VoicePrint.  It has it's place somewhere I'm sure but not on my television channel that I pay for.  Tele-vision get it?
If this is something people want then it should have it's own channel as far as I'm concerned.

THUMBS UP An article by Carmen Chai in Postmedia News calls for the restoration of prison work farms.  Some of the benefits such mentioned were that it offers inmates an opportunity to work with living things.  Research shows that the interaction has a calming and 'restorative' effect and helps to develop qualities such as respect, empathy, responsibility and dependability as examples.  The last of six prison farms closed last August affecting some 300 prisoners who worked on them citing operation losses.  80% of offenders serving sentences of two years of more in Canada's 57 federal prisons have alcohol or drug problems.  The report was made by Mental Health and Drug and Alcohol Addiction in the Federal Correctional System and urges that priority be given to improve how it handles mental health issues:  The authors say the prison environment is harmful to mental health.
Posted by DeltaJoy at 7:15 PM No comments: