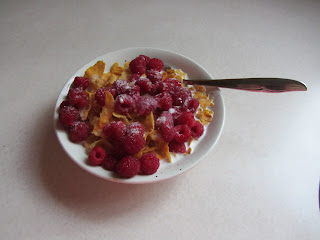 This is a masterpiece visually and gastronomically.  When I first discovered this wonderful combination I had my own raspberry canes but now days I have to depend on my friends and every year they come through for me.  Today I really indulged and added a bit of cream to my usual 1% milk...OH MY!
There are many food combinations that just go together like bacon and eggs, peanut butter and jam, cheese and crackers and many more I'm sure you can think of.  Well I'm adding raspberries and corn flakes to that list and here and now I have made it official by this decree and my *stamp of approval*.  The flavor burst with every mouthful is extraordinary and I encourage you to try it because I know that you will ever make it YOUR favorite also.
Posted by DeltaJoy at 9:17 PM No comments:

BELLYBUTTON CULTURE....is nothing is sacred anymore?

It must make for some very interesting cocktail conversations.......


Human skin is teeming with microbescommunities of bacteria, many of which are harmless, live alongside the more infamous microbes sometimes found on the skin. Nina Rountree from North Carolina State University and colleagues set out to dispel the myth that all bacteria on the skin are disease-causing germs. The researchers cultured the bacterial communities living within bellybuttons of 391 individuals from across the U.S. and published photos of the cultures anonymously in the online Bellybutton Bacteria Culture database. They chose bellybuttons as an area of the body that is generally protected from excretions, soaps and ultraviolet ray exposure.
The experiment generated interest among citizen scientists and provided clues about the stability of bacterial communities over time, the significant turnover between participants' bacterial communities and similarities of bacterial communities between family members. The bellybutton Bacteria Culture database received 55,000 visitors in only three months.
The research entitled "Beta-diversity of human skin bacteria studied with the citizen science approach" led by Nina Rountree from North Carolina State University, will be presented Friday, August 12 during the "Biodiversity" poster session.
Posted by DeltaJoy at 6:24 PM No comments:

TOGETHERNESS HAS GONE TOO FAR 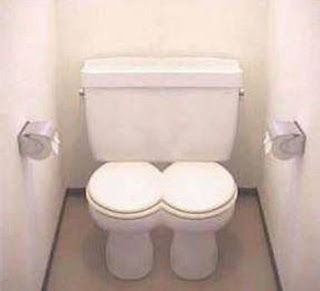 Email ThisBlogThis!Share to TwitterShare to FacebookShare to Pinterest
Labels: TOGETHERNESS 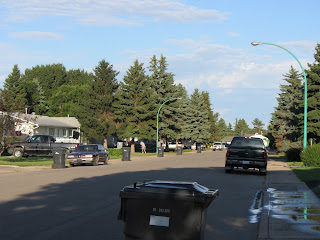 The new order here on the streets is admittedly neat, organized and much more sanitary. 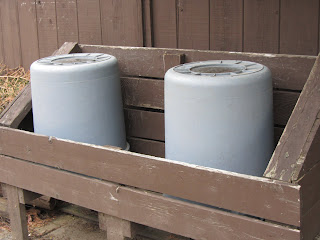 However there is a forgotten segment of the waste disposal community; the lowly, lonely garbage can languishing along every back alley in cities and towns everywhere .  What can be done with once useful garbage containers?  Maybe a contest to come up for a unique use in countries with tent cities.  Perhaps they coul  be cleaned and sterilized and used as water or food containers.
Posted by DeltaJoy at 8:45 AM No comments:


You can also make these with the same recipe:
Chocolate Babycakes With Mocha Buttercream Frosting!.
Posted by DeltaJoy at 12:40 PM No comments:

Email ThisBlogThis!Share to TwitterShare to FacebookShare to Pinterest
Labels: RECIPE 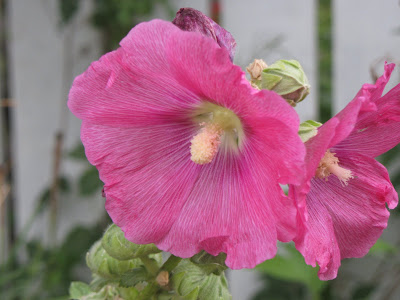 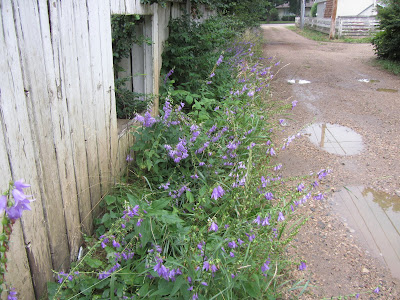 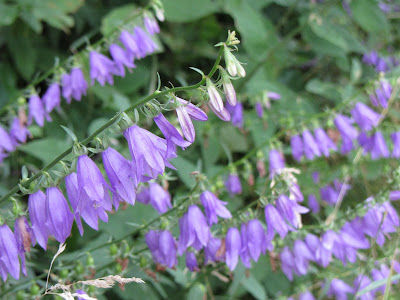 Hollyhocks seem to be absent for the most part this year so when I spied this pink beauty I just had to have it.  The  bluebells just filled this back alley they were everywhere.
Posted by DeltaJoy at 7:07 PM No comments:

Email ThisBlogThis!Share to TwitterShare to FacebookShare to Pinterest
Labels: Flowers of August

A woman has twins, and gives them up for adoption.  One of them goes to a family in Egypt, and is named 'Ahmal.'  The other goes to a family in Spain; they name him' Juan'.  Years later, Juan sends a picture of himself to his birth mother.  Upon receiving the picture, she tells her husband that she wishes she also had a picture of Ahmal.  Her husband responds, "They're twins! If you've seen Juan,  you've seen Ahmal."
Posted by DeltaJoy at 4:10 PM No comments: