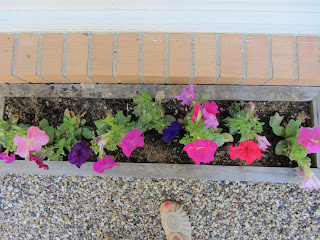 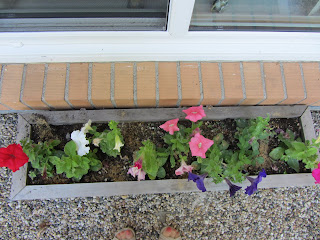 Unless garlic becomes an acquired taste for the area squirrel population I think I've solved this three year battle.  As you can see there has been little, very little digging activity in the boxes.  The top picture had some intrusion in the upper left corner but the bottom picture only had a half-hearted swipe at in it's upper left corner.   I was unable to find any more freeze-dried garlic so mixed garlic powder with curry.  I hadn't tried curry before just combos of pepper, paprika and cayenne so there is a possibility that curry alone might do the trick.  F/dried garlic is expensive so perhaps I've stumbled upon a cheaper solution which is fine with me.  Pardon my toes I wasn't paying attention.
Posted by DeltaJoy at 4:20 PM No comments:

A BUSY BUT SATISFYING DAY 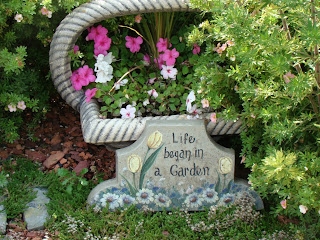 I rather like this picture I took in front of a nursing home a couple of years ago.  I spent most of today in nursing homes and hospitals visiting with friends that recently moved there and a an elderly man who went into hospital over the weekend and was able to report on his condition to his wife in the one the aforementioned homes.  Verna, a friend with pneumonia that I saw on Saturday went home today  and a fellow who had a heart attack will be home tomorrow from the city says his daughter when I delivered a card to their home.  If one feels sorry for their present problems there is nothing like taking a cheery card or some fruit to others who are much worse off than yourself.  Usually they are the ones that cheer YOU up and you come home feeling much better about yourself and circumstances.  There is always someone worse off than you are.
In less than a week I was able to visit with 7 sick and infirm friends.  While that may not be remarkable to most it is to me compared to the winter I spent virtually able to visit no one due to my problems and the awful winter.  I said to friends Al and Jo Anne that I want to go with them to Panama when they go down there for six months over the fall and winter as I'm sure that six months of warm weather would keep me productive.  But considering I'm slightly larger than a cat I don't not think they'll agree.
Posted by DeltaJoy at 8:14 PM No comments:

MY FOOD IS LAUGHING AT ME 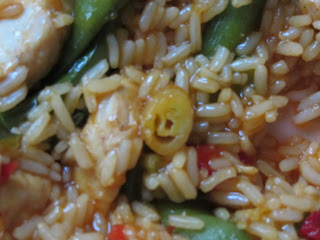 As I tucked into my VH Spicy Orange Chicken Steamer I saw this onion laughing right in my face.....so I ate it!!  I looked very carefully at all the other veggies to see if this disrespectful attitude had spread but apparently I nipped it in the bud and prevented an all out food rebellion.  Thank goodness or I'd really be hungry right now and out $3.00 bucks too.
Posted by DeltaJoy at 5:52 PM No comments:

NEED AN EXCUSE TO SLEEP IN?

Results of objective measurements show that the mean total sleep time per night during sleep extension was 110.9 minutes longer than at baseline. Indices of athletic performance specific to basketball were measured after every practice to assess changes in performance. Speed during 282-foot sprints improved significantly from 16.2 seconds at baseline to 15.5 seconds after sleep extension, and shooting accuracy increased significantly by nine percent on both free throws and three-point field goals. Subjects also reported improved overall ratings of physical and mental well-being during practices and games.

The study involved 11 healthy students on the Stanford University men's varsity basketball team and was conducted during two basketball seasons from 2005 to 2008. Participants had a mean age of 19 years and an average height of about six feet and four inches. Eight of the players were guards, two were forwards and one was a center.

Total sleep time was measured objectively by actigraphy. The players maintained their habitual sleep-wake schedule for a baseline period of two to four weeks during the NCAA basketball season, sleeping for an average of less than seven hours per night. The following period of sleep extension lasted five to seven weeks, during which the participants obtained as much nocturnal sleep as possible with a minimum goal of 10 hours in bed per night. Objective mean total sleep time during sleep extension was nearly 8.5 hours per night.

Mah said that she was especially intrigued to find that sleep extension was associated with improvements in diverse basketball skills.

"It was interesting to note that sleep extension significantly improved different measures of physical performance in basketball from shooting percentages to sprinting times," she said.

According to Mah, an athlete's nightly sleep requirement should be considered integral to attaining peak performance in all levels of sports. She offered these tips to help athletes improve their performance by maximizing their sleep:
Prioritize sleep as a part of your regular training regimen.
Extend nightly sleep for several weeks to reduce your sleep debt before competition.
Maintain a low sleep debt by obtaining a sufficient amount of nightly sleep (seven to nine hours for adults, nine or more hours for teens and young adults).
Keep a regular sleep-wake schedule, going to bed and waking up at the same times every day.
Take brief 20-30 minute naps to obtain additional sleep during the day, especially if drowsy.
Mah presented preliminary results from this study at SLEEP 2007, the 21st annual meeting of the Associated Professional Sleep Societies, in Minneapolis, Minn. The results are consistent with similar research she has performed at Stanford involving men and women who compete in other sports such as football, tennis, and swimming.
Posted by DeltaJoy at 4:22 PM No comments:

BACK ALLEY OFFERING OF THE DAY 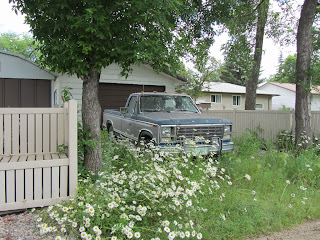 By the amount of daisies I've seen around town this year I think they are poised to take over the world.
Posted by DeltaJoy at 2:03 PM No comments: 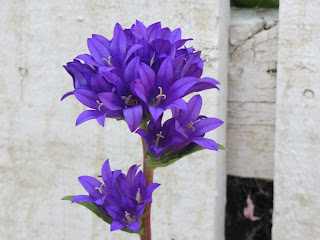 This is what my back alley walk produced yesterday.  I love walking there because it's quiet and one hardly encounters any traffic at all.  But most of all I like to see what the neighbors don't generally want on show and it can be quite interesting at times.  There are a few very nice back yards to enjoy as well as being able to check on the progress of the gardens and any construction projects going on.

I bought a bed today, that was pretty exciting because I got ALL my pictures up on the two walls in there over the week end which I wanted to do before I shoe-horned a bed in there.  I've also decided to change my cable provider and so am looking forward to the 'cable guy' some day, some afternoon likely this month, seriously though I do know the date.
In the past 5 days I learned some shocking news that some close friends of mine are having some serious problems.  Two had heart attacks and one young lad had an accident that sent him to the burn unit.  Three things like that all at once is quite nerve wracking and on top of that also my son told me a friend of HIS had a heart attack!!!  I am hoping things will settle down quickly for all involved.
Posted by DeltaJoy at 5:34 PM No comments:

A dyslexic man walked into a bra.
Posted by DeltaJoy at 12:16 PM No comments: